Register for Financial Planning Today website for FREE to view more stories and get our daily newsletters. Click on 2 stories to see Registration pop up.
Monday, 24 January 2022 06:31 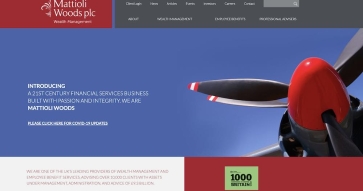 Wealth manager and SIPP provider Mattioli Woods has faced delays to the appointment of David Kiddie as its new chairman.

His appointment was expected to start on 21 January however the appointment remains subject to regulatory approval which has yet to be received.

Current chairman Joanne Lake announced she would step down in September.

Ms Lake will remain as chairman during the extended handover period.

Gross discretionary assets under management rose 55% over the half to £5.1bn.

The wealth manager and SIPP provider released a trading update at the start of this month in advance of its interim results which are to be announced on 8 February.

Whilst much of the growth in client assets came due to recent acquisitions, the firm also saw strong organic revenue growth in excess of 10%.

According to the trading update, both acquisitions are now integrated and performing ahead of budget.

More in this category: « FSCS opens claims against failed BSPS adviser FinoComp founder to step down »
back to top