Register for Financial Planning Today website for FREE to view more stories and get our daily newsletters. Click on 2 stories to see Registration pop up.
Thursday, 31 March 2022 08:10 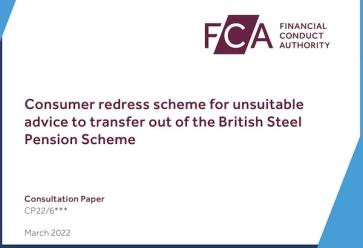 The Financial Conduct Authority is set to launch a scheme to pay out an estimated £71.2m to victims of the British Steel Pension Scheme pension transfer scandal.

The regulator estimates that nearly half of the BSPS members (46%) received “unsuitable” advice from the 343 advice firms involved.

Some 1,400 BSPS scheme members are set to be compensated although some have already received some compensation payments.

It may take until the end of 2023 before compensation payments are made.

The FCA published its long-awaited proposals for a compensation scheme today.

Hundreds of BSPS members were forced to consider transferring their pensions when the scheme was closed but a number of unscrupulous advice firms moved in and gave poor advice resulting in losses for many BSPS members. The scandal is one of the biggest financial advice failings in UK regulatory history.

If the scheme is confirmed, the FCA will publish rules setting out how advisers must determine whether they gave unsuitable advice and whether they must pay compensation. The FCA has warned advice firms involved in BSPS advice that they should retain assets and should “not try to avoid their responsibilities.”

The FCA has previously warned that it will take “strong action” against impacted firms who try to avoid their responsibilities to pay compensation and already has an asset freeze in place on one firm. It has reminded firms of its expectations.

The Financial Services Compensation Scheme will consider claims from individuals who received advice from an insolvent business or one which no longer exists.

If confirmed, the scheme is hoped to be in place by early 2023, with consumers starting to receive compensation from late 2023. Information is available on the FCA’s website.

The watchdog said in its updated report - CP22/6 - today that it estimates the proposed special scheme will mean that 1,400 BSPS members will receive £71.2m in total redress. This is £56.1m more than if the FCA simply continued with its current supervisory and enforcement work.

Sheldon Mills, executive director for consumers and competition at the FCA, said: “The circumstances around British Steel Pension Scheme transfers were exceptional, with former members receiving significantly higher levels of unsuitable advice compared with other cases.

“We want individuals who lost out financially after receiving unsuitable advice to receive compensation through our scheme.”

The BSPS scheme is the second time the FCA has used its powers under section 404 of the Financial Services and Markets Act to launch a compensation scheme. The first related to consumers who were given unsuitable advice to invest in Arch cru.

Helen Morrissey, senior pensions and retirement analyst at Hargreaves Lansdown, said: “These proposals, if implemented, mean many more people who lost out after transferring out of the British Steel Pension Scheme get the compensation they deserve. The consultation puts strong emphasis on the number of people yet to make any kind of compensation claim and puts processes in place so their case will be reviewed.

"Rather than the client having to approach the adviser with a complaint themselves advisers will need to review affected cases and pay appropriate redress if their advice is found wanting. Firms are expected to identify and prioritise those who may be vulnerable or in need of fast access to redress. This will cover many people who either don’t know they have a claim or have yet to file one.

"In response to concerns that advisers are effectively marking their own homework cases where the advice is deemed suitable will need to be checked by a senior individual so there will be safeguards in place. The British Steel case has damaged the retirement prospects of so many people. These proposals if implemented should help more people get justice.”

Matthew Connell, director of policy and public affairs for the Personal Finance Society, said: “British Steel employees had an extremely difficult decision to make, given that staying in their existing scheme was not one of the options they were offered. As a result, it is important that the review considers each case on its merits, and does not simply rely on generic assumptions.

"The fact this is only the second time the FCA has used its powers to launch a compensation scheme reflects the fact that the regulator have concluded too many British Steel workers were wrongly advised to give up a guaranteed income for life. They have noted that the amount of cash required to replicate guaranteed benefits is significant for any individual case.