Register for Financial Planning Today website for FREE to view more stories and get our daily newsletters. Click on 2 stories to see Registration pop up.
Monday, 04 April 2022 09:12 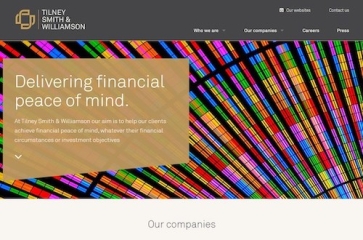 Tilney Smith & Williamson has cooled speculation of an imminent bid for the company from NatWest.

Officially Tilney, due to rebrand as Evelyn Partners later in the summer, is saying “no comment” to the bid rumours reported by Sky News over the weekend.

According to Sky News, NatWest Group is contemplating an “audacious takeover bid” for Tilney Smith & Williamson.

Sky News believes NatWest is in the early stages of considering an offer for Tilney Smith & Williamson, which it claims is being put up for sale by its private equity backers. Sky News adds that a “substantial number of banks and financial investors were likely to explore bids for Tilney.”

Tilney is owned mostly by private equity firms Permira and Warburg Pincus and could fetch between £2.5bn and £3bn from a sale, according to Sky News.

The British Government recently reduced its stake in NatWest to below 50%.

Tweet
This page is available to subscribers. Click here to sign in or get access.
Published in Articles
More in this category: « Adviser confidence drops despite rising client satisfaction River & Mercantile shareholders back AssetCo takeover »
back to top