Register for Financial Planning Today website for FREE to view more stories and get our daily newsletters. Click on 2 stories to see Registration pop up.
Wednesday, 04 May 2022 10:35 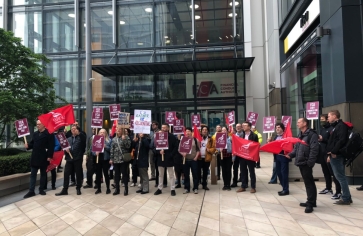 FCA staff taking part in the strike this morning

Unite union members at the Financial Conduct Authority have begun a 48-hour walkout today in a protest over pay, terms and lack of trade union recognition.

Unite members holding placards staged a protest picket line outside the regulator from 8.45am.

The strike is believed to be the first ever industrial action at the regulator.

Unite said the strike follows, "many months of refusals by FCA management to listen to the concerns of their workforce."

From Friday staff at the FCA who are members of Unite will begin a continuous ‘work to rule’ protest, withdrawing from regular overtime and additional work they currently do outside of their contractual duties.

The FCA said today it had not seen any change in the number of staff logging onto an FCA device from the office and remotely and that "the overwhelming majority" of staff are at work.

An FCA spokesperson said: “Our new employment package is highly competitive, providing fair, competitive pay at all levels and rewards strong, consistent performance. Most colleagues are receiving an average 7% increase in base pay this year and over 12% over the next two years, with an additional one-off cash payment of 4% in May.

"Our lowest paid and strongest performers will receive more. The changes we have made ensure the FCA’s pay and benefits package remains one of the best, if not the best, of any regulatory or enforcement agency in the UK.

“The vast majority of colleagues have decided not to strike and we are operating as normal. We acknowledge the decision by Unite members, however, and respect the strength of feeling of some colleagues about changes we have made."

Sharon Graham, general secretary at Unite, said: “Unite members at The Financial Conduct Authority must be congratulated for taking a stand against the disgraceful actions of the management under the leadership of the CEO, Nikhil Rathi.

“The imposition of changes to pay, terms and conditions at the FCA has left thousands of staff worse off. Management’s ludicrous claims that the changes will boost worker productivity has only added insult to injury.

"And then by refusing to recognise the right to an independent trade union, they have really shown the depths to which they are prepared to sink. It is frankly disgusting that a public sector employer like the FCA thinks it can behave with such contempt towards its workers.

“Nobody takes industrial action lightly and this is the first strike in the history of the FCA. Unite members at the FCA know that they are not alone. Unite will stand behind them every step of the way and I will ensure that they have all the support they need. So now the FCA must learn to respect its workers and table a serious offer.”

Over the past six months Unite said it had made several approaches to FCA management but "all attempts made by the union to reach a settlement have been rejected" by the regulator.

Some of the protesting staff met outside the FCA head office this morning to "express their anger", with placards asking FCA management to listen to the staff.

The FCA has previously said it expected about 8% of its staff to join the strike.

The FCA employs approximately 4,000 staff with an estimated 600 in the Unite trade union, about 15% of total staff. The 75% of Unite members who voted in favour of strike action would equate to about 450 staff however it is not known how many of Unite’s 400 members are taking part in the strike.

The FCA said less than 50% of Unite's members either voted to strike or did not vote. The regulator said that "this shows the new employee offer has been received well."

Unite is not officially recognised by the FCA for bargaining purposes but is seeking this status. The union has accused the FCA of planning to cut staff salaries by proposing an imminent pay and benefits shake up which will see nearly all staff bonuses axed, potentially cutting staff packages by 12%. It wants the arbitration service ACAS to get involved to settle the dispute.

The FCA says it has proposed a new staff pay package which it says will substantially raise salaries, particularly for the lower paid.

The FCA said its consultation on the pay package ran from September to December 2021 and involved thousands of staff responses. The FCA executive committee also held 77 sessions virtually and, where possible, in person in London and Edinburgh, the watchdog said.

• This is a breaking news story. Please check back later for any updates.

More in this category: « Kingswood hires tech lead from SPW One Four Nine launches talent development plan »
back to top