Register for Financial Planning Today website for FREE to view more stories and get our daily newsletters. Click on 2 stories to see Registration pop up.
Friday, 07 October 2016 11:28 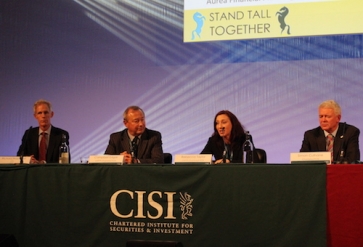 The Chartered Institute for Securities & Investments is to seek a more “level playing field” with the PFS’s rival Chartered Financial Planner qualification.

The move could eventually see the CISI awarding its own Chartered qualification for Financial Planners or sharing the designation.

CISI chief executive Simon Culhane, during a Q&A session at the CISI Financial Planning conference at Celtic Manor Resort in Wales this week, said he believed there was merit in the CISI being able to award its own Chartered qualification to its Financial Planning members to “level the playing field” and reflect their professional status more clearly.

The CISI has declined to comment further on its strategy to achieve this but an approach to the Privy Council, which governs Chartered designations, is likely in the near future to discuss the matter.

More than 2,000 of the CISI’s 40,000 members use the Chartered Wealth Manager designation, including many Financial Planning members from the IFP which merged with the CISI in November last year.

Among the routes that could be considered by the CISI to remedy this could be sharing the designation with the PFS or using another designation agreed by the Privy Council for its Financial Planner members.

The CISI is believed to see a logic in being able to award a Chartered designation which more clearly reflects the business nature of its Financial Planning members although some believe the ‘Chartered Wealth Manager’ designation currently in use is sufficient.

Speaking at the same Q&A session CISI board director and former IFP President Rebecca Taylor said her view was that the Chartered Wealth Manager qualification may be sufficient for most people at this stage.

Many CISI members who wish to use the designation Chartered Financial Planner, and remain members of the CISI, must be members of both the CISI and the PFS. Many choose to do this although it requires them to pay fees to two similar professional bodies.

Chartered status, or Royal Charters as they are more formally known, are awarded and governed by the Privy Council. The Privy Council is a formal body of advisers to the Queen. Many Privy Councillors are senior government figures and often Cabinet Ministers.

Keith Richard, chief executive of the Personal Finance Society, said: “It is interesting that CISI has described the current marketplace as an unlevel playing field. As the financial advice sector’s largest professional body, we’ve made significant strides in the past three years but have always welcomed collaboration rather than competition.

“Our Chartered Financial Planner designation has continued to grow in demand post RDR and consumers now recognise the value of the Chartered brand.

“I expect to see continued growth in demand in the coming years, and greater choice to meet individual needs or preferences is never a bad thing. We already have approximately 5,300 members at Chartered Financial Planner status, and a further 8,500 on the journey to the pre-eminent designation.”

“As well as promoting our Chartered qualifications, our focus remains much broader in supporting the wider advice profession and playing a key role in influencing the future direction of the sector.”