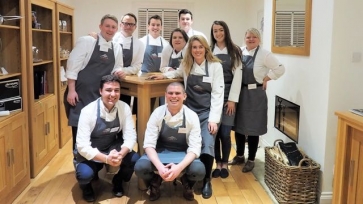 Staff at a Teambuilding Training Day at Lucknam Park

A Chartered Financial Planning firm is to increase its staff numbers by 50 per cent as it revealed about 250 people have applied for a role.

Unividual, based in Corsham, is taking on five new trainees for its financial adviser academy, bringing its overall team up to 15 members.

This will be the third intake for Unicademy, which is a work-based training programme that develops Chartered Financial Planners.

So far around 250 graduates, local students and finance professionals have applied for an academy spot, equating to 50 candidates for each of the five places.

Upon successful completion of Unicademy individuals can choose between a career path of a financial adviser or a technical specialist within the office.

Established in 2000 by Financial Planner and managing director John Baxter, Unividual’s head office is at Hartham Park in Corsham.

Unividual has satellite offices in London, Worcester and Bath.

Mr Baxter’s son and daughter, Lewis and Cherie-Anne, run the business alongside him.

Lewis Baxter, aged 29, joined Unividual in 2009 as Unividual’s first trainee, passing Diploma and Advanced Diploma exams in Financial Planning with the Chartered Insurance Institute and becoming one of the youngest Fellows of the Personal Finance Society at the time.

The business developed the training programme with other trainees and Unicademy was officially launched in 2015.

Cherie-Anne Baxter, Chartered Marketer and marketing director, said: “Over the last decade financial advice firms have placed little focus on succession planning and who will service clients when an adviser retires. The average age of a financial adviser is about 50 years old. Not only is this rising every year but fewer than 20 per cent of financial advisers are under the age of 40.

“Unicademy was born as a strategy to create the next generation of financial services leaders. These carefully hand-picked individuals, trained to the highest of levels, are Unividual’s succession plan.”

Lewis Baxter, Chartered Financial Planner and Director of Unividual said: “It is rare for a business of our size to focus on getting all members of the planning team to Chartered status not just advisers. Unividual’s financial advisers need to be at excellent standards, but it is also essential for the support staff behind these advisers to operate at the same level.

“Unicademy isn’t easy, we focus on transforming people both technically and personally so that they can become the best version of themselves. This programme isn’t for the faint-hearted it requires grit, determination and intelligence.”

Scott Gurd, aged 27, graduated as a Chartered Financial Planner from Unicademy in January 2016. He said: “When I first joined Unividual I had a degree in business management and very little exposure to the financial services industry but the training programme is intense with on the job training and out of hours study to pass the exams required to become a Chartered Financial Planner.

“On becoming Chartered, Lewis and John implemented a training process for me to move in to a client-facing financial adviser role. I am now in my second year of advising with Unividual and haven’t looked back. The Unicademy programme, with a lot of hard work and application, has helped me get to where I am now.”

The 2017 Unicademy programme will begin at the end of August and is still inviting applicants via its website.