Register for Financial Planning Today website for FREE to view more stories and get our daily newsletters. Click on 2 stories to see Registration pop up.
Thursday, 13 July 2017 09:20 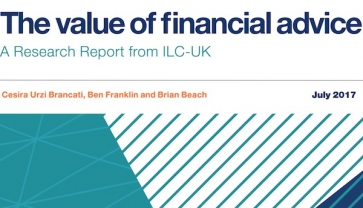 The Value of Financial Advice report

A new report by the International Longevity Centre UK (ILC-UK) has found that those who received financial advice in the 2001-2007 period accumulated significantly more "liquid financial assets and pension wealth" than their unadvised equivalent peers by 2012-14.

The report, ‘The Value of Financial Advice’, analysed data from a large representative survey of individual and household assets in Great Britain, the Wealth and Assets Survey. ILC-UK says the research covering 5,000 individuals shows that those who received advice did better than an equivalent group who didn't.   The report - produced with support from Royal London - examined the impact of financial advice on two groups, the ‘affluent’ and the ‘just getting by’.

The ‘affluent’ group is a wealthier subset of people who are also more likely to have degrees, be part of a couple and be homeowners. The ‘just getting by’ group is formed of a less wealthy subset who are more likely to have lower levels of educational attainment, be single, divorced or widowed and be renting. 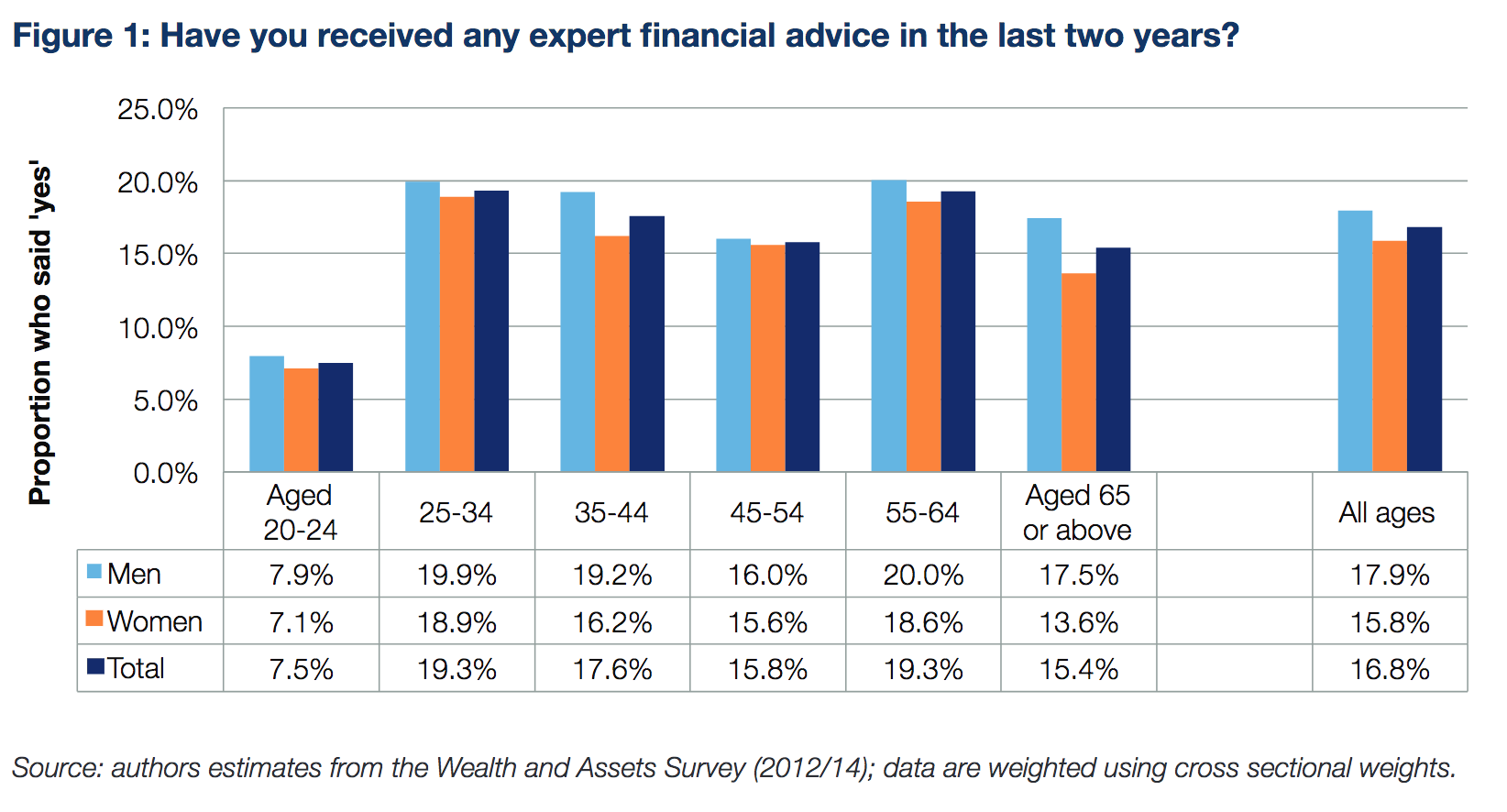 The report found that 9 in 10 people were satisfied with the advice received, with the clear majority deciding to go with their adviser’s recommendation.

Despite the advantages of receiving advice, only 16.8% of people saw an adviser in the years 2012-2014. The ‘The Value of Financial Advice’ found that even among those who took out an investment product in the last few years, around 40% didn’t take advice, rising to 78% of people who took out a personal pension.

‘The Value of Financial Advice’ concluded that the two most powerful driving forces on whether people sought advice was whether the individual trusts an Independent Financial Adviser to provide advice, and the individual’s level of financial capability. 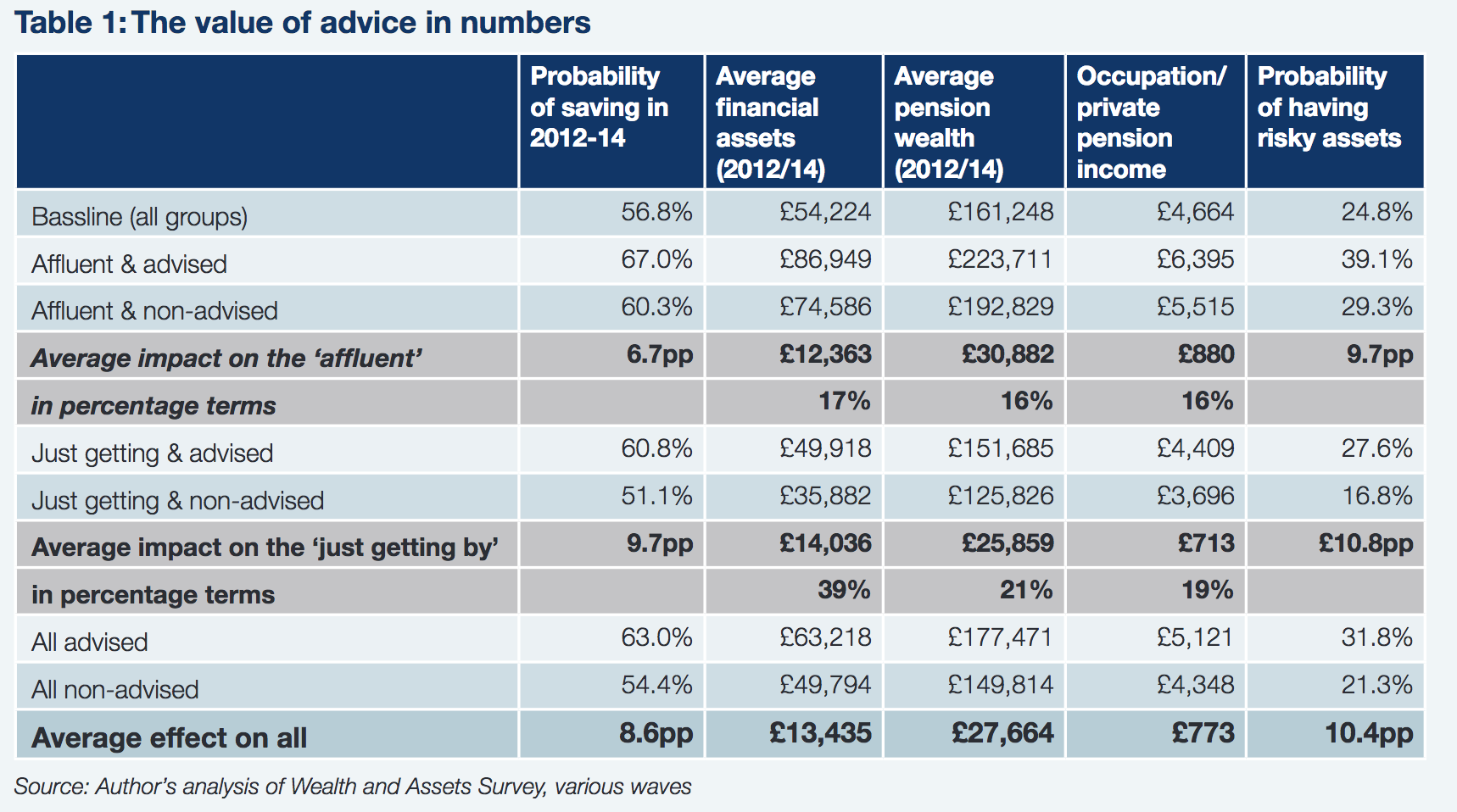 The report makes a series of recommendations to raise demand for financial advice including:

• Using advice to support the auto-enrolled
• Mandating default guidance for those seeking to access their pension savings
• Helping to create informed consumers through continued development and roll out of the pensions dashboard.
• Ensuring regulators continue to place emphasis on access to independent financial advice.


Ben Franklin, head of economics of ageing, ILC-UK said: “Our results show that those who take advice are likely to accumulate more financial and pension wealth, supported by increased saving and investing in equity assets, while those in retirement are likely to have more income, particularly at older ages.

“But the advice market is not working for everyone. A high proportion of people who take out investments and pensions do not use financial advice, while only a minority of the population has seen a financial adviser. Since advice has clear benefits for customers, it is a shame that more people do not use it. The clear challenge facing the industry, regulator and government is therefore to get more people through the “front door” in the first place.”

Steve Webb, director of policy, Royal London said: “This powerful research shows for the first time the very real return to obtaining expert financial advice. What is most striking is that the proportionate impact is largest for those on more modest incomes.

“Financial advice need not be the preserve of the better off but can make a real difference to the quality of life in retirement of people on lower incomes as well. The evidence shows that when people take advice they are overwhelmingly satisfied and benefit as a result. More needs therefore to be done to overcome the barriers to advice.”

A copy of the Value of Advice is available to download from www.ilcuk.org.uk and http://bit.ly/2t4qZwV

• ILC-UK says that 5000 people were tracked between wave 1 of the survey, which captured people who received advice in the years 2001-2007, and wave 4 which, captured outcomes and behaviours of those same individuals in 2012-14.

More in this category: « ABI disputes FCA finding over 'new norm' of cashing in pension Fake death claim mum jailed after pensions firm tip off »
back to top