Register for Financial Planning Today website for FREE to view more stories and get our daily newsletters. Click on 2 stories to see Registration pop up.
Tuesday, 27 March 2018 09:19 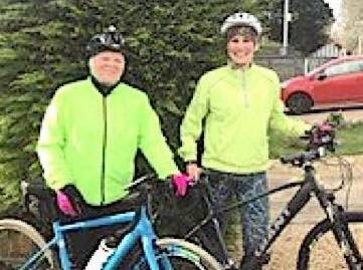 Charitable Chartered Financial Planners Beacon Wealth Management is backing two of its female staff in getting on their bikes for charity.

Natasha Oliver and Pippa Ellis will be participating in a female-only cycle challenge at the Women v Cancer 100km London Night Ride, on 26 May. They will be raising money to help three female cancer charities tackling breast, ovarian and cervical cancers.

The ride will commence at 9.30pm from Royal Windsor Racecourse and the route will take in famous landmarks including Westminster Abbey, Trafalgar Square and Buckingham Palace, before returning to Windsor.

A spokeswoman for the Cambridgeshire-based company said: “Both Pippa and Natasha are training hard for the event even though Natasha didn’t get her bike until mid January.

“Pippa has been a keen cyclist for about four years and to get fit for the ride she is currently getting up at 5.45am every morning and riding 8.5 miles before work, and participating in a Clubbersize fitness class once a week to help build her stamina.

“Natasha goes to bootcamp three times a week and has started riding with Pippa once a week, gradually increasing the distance.

“The furthest they have cycled together so far is 33 miles, which is just over half the distance they will have to complete on the day.

“The plan is to complete at least two 50 mile rides in April before the big day at the end of May.”

The company has been involved in a number of previous charity endeavours, for good causes like Children in Need and Comic Relief.

Tony Larkins, managing director at Beacon Wealth Management, said: “We are very proud to sponsor such a great cause, children deserve to be children and some of them go through a lot at such a young age, they all deserve an award.”