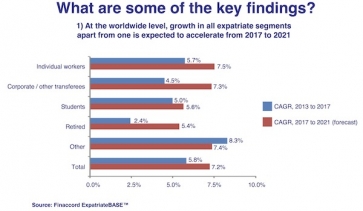 The global expatriate population has reached 66.2m and is likely to rise to 87.5 million by 2021, according to an industry report from consultants Finaccord.

The reports says that the highest numbers of expatriates live in Saudi Arabia, the UAE and Germany with individual workers accounting for over 70% of expatriates worldwide and students for 8.5%.

According to Finaccord, compound growth in the number of expatriates worldwide has been 5.8% annually since 2013, with 52.8 million expatriates globally in that year.

By 2021, market research and consultancy firm Finaccord forecasts that the number of expats globally will reach about 87.5 million.

Across 30 important inbound countries investigated (the destination countries for expatriates), Saudi Arabia hosted the largest number of expatriates in 2017, followed by the UAE and Germany. In the UAE, expatriates made up 87.8% of the total population, which is the highest of the 30 countries surveyed.

David Bowles, a consultant at Finaccord, said: "The number of expatriates in the Gulf Cooperation States – mainly individual workers from Asian countries – has increased at an enormous pace in recent years as these economies are heavily dependent on the inflow of foreign workers.”

"In contrast, in other countries such as the UK and the US, international students, especially from China, constitute a comparatively high proportion of the total expatriate population, while the US and Spain attract the most retired expatriates, chiefly Canadians retiring to the US, and British or German residents retiring to Spain."

Meanwhile, across 25 major outbound countries researched (expatriate countries of origin), India generated by far the largest group of expatriates resident abroad in 2017, with the GCC states a major destination, followed by China and Canada.

More in this category: « RLAM to launch bond fund targeting 5% income Friends and family raise thousands in memory of Paraplanner »
back to top