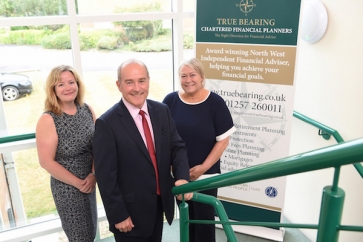 A North West-based Chartered Financial Planner and IFA firm has revealed plans to double its staff as it celebrates its 15th anniversary.

True Bearing Chartered Financial Planners has expanded its team by 300% since 2011 and currently employs 64 staff at its premises in Euxton, near Chorley.

Now its chair and founder George Critchley has set out plans for it to double its staff numbers and triple its turnover to £15m by 2025.

True Bearing advises more than 3,000 individuals and businesses and has £426m of assets under management.

It has its own legal services arm and operates an online advice service, Bread and Butter Advice.

True Bearing says it was one of the first IFAs in the UK to receive Gold Standard Investors in People, which it has retained three times and has been awarded Corporate Chartered Status.

Susan Peary, the managing director and Helen Lupton, compliance director, both joined in 2011.

He said: “Having the right people in place is the key to the success of a business.

“As part of our growth plans, we are looking to double staff to 125 by 2025, which means keeping the existing team and attracting more good people.

“We have already significantly increased productivity but we are aiming for a further 30% gain through the use of new technology.

“While we are not looking to extend to the whole of the UK, we want to be the leader in our region - which stretches from the Scottish borders to West Yorkshire and the Potteries - and we are also considering a location for a second office.”

Mr Critchley, who ran a fitness firm and a health food business before retraining as a financial adviser, founded True Bearing in 2003 with Michael Clarke and Mark O'Neill, who are now non-executive directors.

He added: “With a growing elderly population, IFAs have a really important role to play in safeguarding people's financial future.

“As interest rates are lower than inflation, cash in the bank is effectively losing money.

“Whatever sums people can afford to put away, it is vital that they invest wisely.”