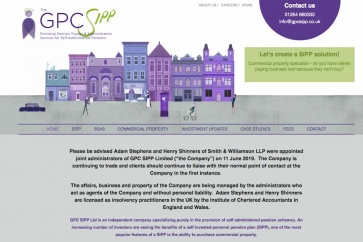 FSCS says it is “working closely with the firm’s administrators” and is investigating the practices of GPC, specifically to establish what levels of due diligence were carried out by the firm, prior to letting customers make specific investments under their pensions.

FSCS says it is aware that many GPC customers were advised by IFAs to transfer existing pensions into a GPC SIPP.

Following the pension transfer, customers had their pension funds placed in high-risk, non-standard investments, many of which have become illiquid.

It was revealed that FSCS had already assessed and paid a number of claims made against IFAs already declared in default, in relation to advice customers received to transfer their pension into a GPC SIPP.

A spokesman said: “Although FSCS is accepting claims against GPC SIPP Limited, claims will not immediately be passed to our claims processing teams for individual assessment.

“Our first step is to be satisfied that GPC, due to its practices, is liable for customers’ losses.”

More in this category: « Foster Denovo launches platform and Dynamic Portfolios FSCS declares 8 financial firms in default »
back to top