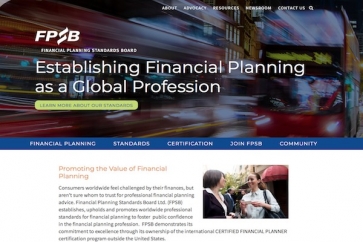 The Financial Planning Standards Board Ltd (FPSB), the global body for Certified Financial Planner certification, has appointed UK compliance consultant and lawyer Adam Samuel as one of two new directors.

At its recent annual meeting in Zurich Mr Samuel, a well known commentator on UK financial services, and US Financial Planner Jeff Farrar CFP were selected to serve four year terms on the board of directors starting in April.

He has served as an independent panelist/adviser on disciplinary cases and was a member of the Ethics Committee for the Institute of Financial Planning (which merged into the FPSB’s current UK affiliate, the Chartered Institute for Securities & Investment) and has served on a number of arbitration panels.

He is an ad hoc member of the Exam Committee for the UK Chartered Insurance Institute and runs his own business, Adam Samuel Training and Consultancy. He is a dual member of the New York Bar and the Bar of England and Wales, and a visiting lecturer on international arbitration at the University of Westminster in the UK.

He said: “I look forward to applying my international compliance, regulatory and standards-setting knowledge to support FPSB in setting standards of excellence for Financial Planning worldwide.”

Mr Farrar co-founded Procyon Partners – an independent, employee-owned financial advisory firm based in Shelton, Connecticut, and New York City in 2017. He previously worked at UBS and served for 20 years in the US Coast Guard.

Mssrs Farrar and Samuel will join six other volunteers on the FPSB board from Bahrain, Brazil, the Netherlands, Singapore, South Africa and the United States.

The FPSB owns the Certified Financial Planner programme outside the US. It has 181,000 CFP holders in 27 territories worldwide and aims to have 250,000 by 2025.