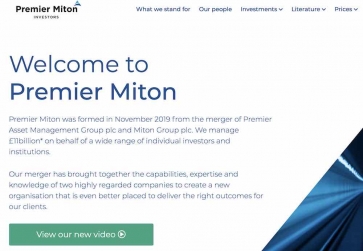 In contrast, the Investment Association said this week that UK equity funds had their best month in November for six months.

Net outflows at Premier Miton were £222m during the quarter compared to £65m net inflows in the same period in the previous year. The company says that it expects the outlook to improve in 2020.

In a quarterly update of its unaudited statement of Assets under Management for the three months to 31 December the group said that total Assets Under Management nearly doubled from £6.4bn to £11.6bn as the combination of the two groups became evident.

The group was formed in November by the merger of Premier Asset Management and Miton Group. It has a range of multi-asset funds, equity funds and investment companies.

Mike O'Shea, chief executive, said: "Although it is still early days, progress has been swift in terms of creating the management structure for the new group and the planned synergies are now underway. We will update shareholders following the end of the half year period with more detail on merger progress.

“With UK political uncertainty beginning to lift, we believe that investor confidence will improve in 2020.

“Against an expected more favourable background, we believe the combination of our broader product range, strong investment performance across different investment strategies, including our equity and multi-asset funds, and our enlarged distribution and marketing capabilities, means we are well placed for future growth."