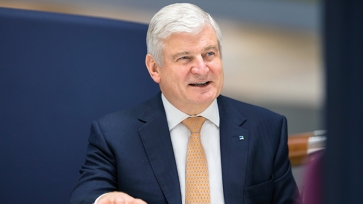 Sir Adrian Montague, chairman of Aviva, is to retire this year once a replacement is found.

Sir Adrian has helped steer the group through major change in recent years under pressure from the City to turn the group around and give it a clear direction.

New chief executive Maurice Tulloch was appointed last year and is spearheading a major restructuring which will see the group streamlined into five divisions to produce a “simpler, stronger and better business.”

Sir Adrian said: “When I became chairman in 2015 the board asked me to commit to serve for at least five years.

“Now that Maurice has launched Aviva’s strategy, a new senior management team is in place and the board has been refreshed, it is also time for a new chairman.

“In the meantime I remain committed to this great organisation which I am confident will deliver for all its customers, employees and shareholders.”

George Culmer, senior independent director, said: “On behalf of the board, I would like to express our deep thanks to Adrian for his service, leadership and guidance over the past seven years.

“Adrian has chaired Aviva through a period of considerable change and departs with our very best wishes for the strong legacy he leaves.”

More in this category: « FCA warns on ‘excessive’ adviser fees FCA urges caution over suspected fake databases »
back to top