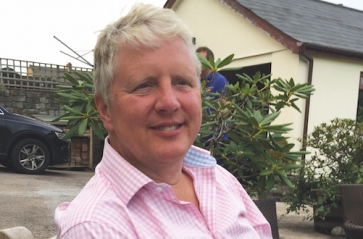 Nick Cann CFP, the ex-CEO of the Institute of Financial Planning, has spoken movingly of his long-term battle to recover from a devastating stroke.

The Q&A is featured in the latest Financial Planning Today magazine as the fifth anniversary of the 2015 IFP merger with the CISI nears.

Mr Cann is now a campaigner for stroke charities - recently being awarded the British Empire Medal - but also maintains a keen interest in the Financial Planning profession.

In the interview he says he believes the CISI has tried hard to continue to build the profession but progress has been slow.

He suffered a life-threatening stroke caused by a brain haemorrhage in 2013 which resulted in long term speech problems and some mobility issues. He was hospitalised for several weeks at the time.

He said: “My stroke happened 7 years ago; I am a stroke survivor with Aphasia (difficulty with speech) and Atrial Fibrillation (irregular heartbeat).

“What this means is that one of my eyes, my arms, a leg and my right side have been affected but I am making good progress. I am confident, positive, proud and good humoured."

Since the brain injury he has jointly raised £120,000 for stroke charities as part of a “notable team effort” and says he was honoured to receive the BEM award.

He said: “We built a great team and created magical conferences all over the country.”

While he believes the merger was necessary he said he was disappointed that the merger meant some loss of the old ‘ethos’ and ‘spirit’ of the IFP and some good team members left.

He said he has been disappointed the number of Certified Financial Planner professionals has failed to grow since the merger.

He said: “We had 1,000 CFP Professionals in 2015; in 2020 only 915 so they are not doing so well. This is disappointing. In some ways. UK Financial Planning in the style we promoted is less significant but the new Level 7 CFP exams are some progress.”

He believes there could have been 1,500 CFP Professionals by now if the IFP had continued.

Overall, he remains positive about the future growth of Financial Planning and says the emergence of larger player such as Quilter, SJP, HL and Charles Stanley is a sign of health.

He said: “The profession is in a good position with high quality Financial Planners and Paraplanners. The future will be about clients first and foremost but also taking good care of employees while running a profitable, caring business.”

• You can subscribe now to receive the magazine regularly. A preview of the magazine and interview is here http://bit.ly/2U2R3Ih

More in this category: « Tilney hires new Financial Planner for Edinburgh team CII and CISI cancel exams for at least 1 month »
back to top