Majority of readers back axing of Paraplanner Powwow name 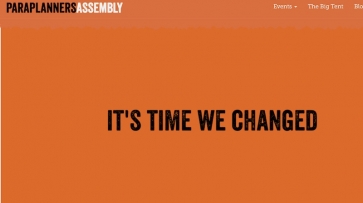 The Paraplanners Powwow movement decided last week to change its name to the Paraplanners Assembly with immediate effect due to concerns about the potential offence to native American traditions.

The event has used themes of the Wild West and native American culture since being launched in 2013 with some members donning ‘warpaint’ at events, some held in Teepees.

More than 170 readers voted in the Twitter poll which ended last night with 54.6% voting in favour of the name change and 45.3% against.

Richard Allum, founder of the Paraplanners Assembly, told Financial Planning Today: “It’s hard to overstate just how relaxed the Paraplanning community has been about our change of name. Besides a couple of emails, most Paraplanners who have taken the time to contact us directly understand why we’ve done what we’ve done and have let us know they support the change.

“We ran our first online assembly last week. More than 60 people took part and the name change didn’t crop up at all. Changing our name was the right thing to do. We’ve set out why we did very clearly last week. We were challenged, it was a good point and so we changed the name. It’s really as simple as that.”

Financial Planning Today polled the question: ‘Was it right to change the name of the Paraplanner Powwows to Paraplanner Assembly to avoid 'cultural appropriation’?’

The volunteer-run Paraplanner movement, which runs physical and online training events for Paraplanners, has apologised for what it now calls a “mistake” in using Wild West and Hollywood imagery of native Americans at its events.

Use of the name ‘Powwow’ and ‘Howwow’ will stop and native American imagery, such as warpaint donned by some members at events, will end.

The movement said it has been encouraged to review its name by the Black Lives Matter campaign and by an email “challenging” the organisers use of native American imagery.

The group said last week: “In recent weeks we’ve had plenty of reasons to think again about persisting with the ‘Powwow’ theme - not least because we received an email challenging us directly about our adoption and use of the powwow idea, naming and associated branding. As organisers, we should have recognised the harm that the adoption of the powwow would cause. We didn’t and we are sorry.”

The group is continuing to organise online events under its new name including, recently, coffee mornings to give Paraplanners a chance for a social chat. New branding is likely in the future.

More in this category: « 1 in 5 five over 50s have no savings - report Quilter Foundation donates £50,000 to Coronavirus appeal »
back to top