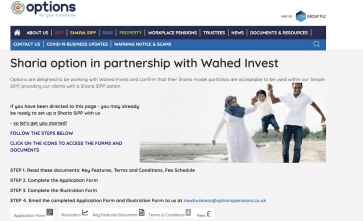 Options is part of the expanding STM Group and was formerly known as Carey Pensions.

The Sharia SIPP is one of the first new products to be launched by Options since it became part of STM.

STM said of the new products: “Both have been well received to date, albeit it is too early to predict how much volume will come through during the next few months, we are optimistic as to the prospects for this innovative initiative.”

Options says the Sharia SIPP will use its SimpleSIPP structure to provide clients with a Shariah-compliant investments. Wahed Invest will supply the investment options.

In its trading update STM said it had suffered limited impact from Coronavirus although new business was taking longer to integrate.

It said new business “remains healthy and has continued to grow month on month, albeit conversion timelines on flexible annuity and bulk transfers of work-place pensions remain slower than previously anticipated.”

Staff have mostly been working from home but some are now returning to the office.

New business revenues for QROPs and SIPPs for the expatriate market remained steady and the group continues to look for new acquisitions.

The company has also reported agreement between the STM Group of companies in Gibraltar and the Gibraltar Financial Services Commission following the Deloitte Report on the business and the companies’ status as regulated firms remain unchanged and no further action is contemplated.

The company had to deal with regulatory concerns in Gibraltar about a tax dispute with a client some years ago.

More in this category: « Profits fall 30% at Standard Life Aberdeen as Covid-19 hits CII and university launch MBA in Islamic finance »
back to top