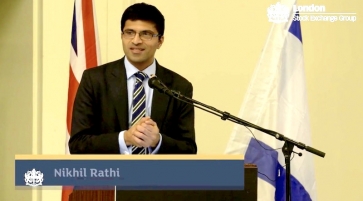 Nikhil Rathi at the LSE

The new chief executive of the FCA, Nikhil Rathi, will begin work at the regulator tomorrow (1 Oct).

His appointment was announced in June by the Treasury and he will replace interim CEO Christopher Woolard who will move on from the FCA to head a review of regulation.

Andrew Bailey, the previous permanent CEO of the FCA, left in March to become Governor of the Bank of England.

The FCA says that Mr Rathi will not give an opening press conference but confirmed he will take up his role this week.

Mr Rathi is the former London Stock Exchange CEO and will receive an annual salary at the FCA of £455,000 and 12% pension but will not be entitled to a bonus or paid any other benefits, the FCA said. He will relinquish any links to the LSE.

FCA chair Charles Randell said on Mr Rathi’s appointment that he looked forward to working with Mr Rathi and said he had already proved helpful in guiding the FCA’s development through his roles on its Practitioner Panel and Markets Practitioner Panel.

Mr Rathi said on his appointment: “I am honoured to be appointed chief executive of the Financial Conduct Authority. I look forward to building on the strong legacy of Andrew Bailey and the exceptional leadership of Christopher Woolard and the FCA executive team during the crisis.