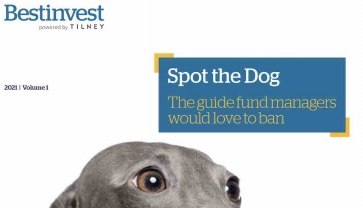 Bestinvest has reported a 33% rise in the number of poorly performing ‘dog’ funds over the past year with some major names faring badly, according to its latest ‘Spot The Dog’ fund report.

In its latest report Bestinvest names and shames 119 stock-market focused investment funds that have consistently underperformed the markets they invest - up a third in the past year.

Fund giant Invesco is the worst performer, or ‘Top Dog’ in the report for the sixth time in a row, with 11 funds holding £9.2b of assets.

Jupiter has moved into second place having become a “rescue home” for Merian Global Investors which it bought last year, says the report.

Jupiter has fought off stiff competition from wealth manager St James’s Place and Schroders , which has its own Financial Planing arm, for third and fourth place. Funds managed by Hargreaves Lansdown, Dimensional and Janus Henderson also appear in the ‘biggest beasts’ dog fund list.

To be included as a ‘dog fund’ the investment vehicles must meet a number of criteria including delivering a worse return than the market it invests in for each one of the last three 12-month periods on the trot (calendar years 2020, 2019 and 2018).

It must also have underperformed the market it invests in by more than 5% over the entire three year period under review. Bestinvest says the worst performer in its report under-perfomed the market it benchmarks by 42%.

Bestinvest says some investment sectors are more prone to underachievement with the highest count – 38 funds – found in the global equities sector. Another area with a relatively high number of dog funds is North America where 21 funds met the criteria.

In contrast Bestinvest says that dog funds that invest specifically in smaller companies appear to be an “extinct breed” with none in this sector matching the ‘dog fund’ criteria.

Bestinvest says many of the funds it analyses are ‘Chihuahuas’ (less than £100m in size) but 15 funds are classified as ‘Great Danes’ with over £1 billion of assets each. These include funds that are widely held by private investors, says Bestinvest, and managed by groups such as Invesco, St. James’s Place, Schroders and Hargreaves Lansdown.

Jason Hollands, managing director at Bestinvest, said: “Recognising that you might have your money invested in a dog-fund is not as straight-forward as you might think. While 32 of the funds in the report actually lost investors’ money over the last three-years – the worst by -41%! - most of them didn’t.

“That’s because stock-markets in general have delivered very strong returns over the last decade and so nearly all ships have been lifted by the rising tide, even those with leaks in their hulls.”

• The report can be downloaded here: www.bestinvest.co.uk/research/spot-the-dog

The Biggest Beasts in Spot the Dog by Fund Size

Note:  Three-year underperformance is the extent to which a fund lagged the market it invests in, not the absolute return delivered by the fund. All data is total return (including dividends reinvested) for periods to 31 December 2020. Source: Bestinvest

More in this category: « LEBC reports financial loss following death of CEO FCA steps in to halt car investment scheme  »
back to top