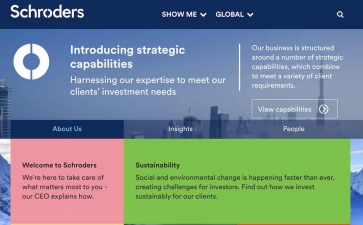 The target for Schroders Personal Wealth to become a top 3 Financial Planning business by 2023 has been pushed back two years to 2025 amid signs growth is providing harder to achieve than expected.

The new target was set in full year results published today for Lloyds Banking Group, which owns half of Schroders Personal Wealth along with partner Schroders.

Lloyds Banking Group said in its results today: “We continue to expect Schroders Personal Wealth to be a top 3 financial planning business, although this is now expected by 2025.”

Lloyds insisted, however, that the group was on target to be a major player in the Financial Planning sector.

Lloyds said today that its group results for 2020 had been hit by the pandemic but the company had showed signs of resilience.

The target of Schroders Personal Wealth to become a top 3 player in the Financial Planning sector was always an ambitious one and a combination of Covid-19 and, unsurprisingly, strong headwinds have forced this target to be reassessed. It's fair the market has become more challenging for a variety of reasons and more competitive. Many Schroders PW competitors have upped their game. Since Schroders PW launched private equity money has flooded the sector resulting in rapid growth for some of Schroders' rivals. Schroders has also seen too many CEOs come and go. Behind the scenes it also appears many senior staff and executives have left judging by the number joining other outfits. Recent redundancies at St James's Place suggest being a big player in the wealth management / Financial Planning sector is not without setbacks. Despite this, Schroders Personal Wealth cannot be called a failure, not just yet. It has the big guns of Lloyds Banking Group and Schroders behind it and they have deep pockets. If they continue to have faith in the operation there is plenty of potential but a new path to growth may need to be set if Schroders Personal Wealth is to be a top 3 firm within 5 years.

More in this category: « M&G selects new CEO of Ascentric platform FCA to refund £3.4m to Ponzi scheme victims  »
back to top