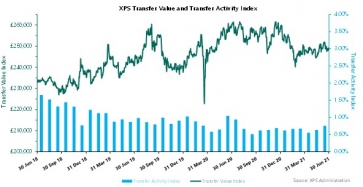 Defined benefit transfer activity increased in June for the third month in a row to high the highest levels seen since July 2020.

Annually 75 out of every 10,000 defined benefit pension members are now transferring their pensions, according to XPS Pension Group’s Transfer Activity Index based on its own DB scheme administration data.

XPS’s scams Red Flag Index feel in June, but remained at a high level with 55% of transfers showing at least one warning sign of a potential scam of potential for poor member outcomes.

On 6 July, the Government published its response to the Work and Pensions Committee’s report on the first phase of its inquiry into protecting pension savers. In it, the Government rejected the committee’s recommendation that the upcoming Online Safety Bill should do more to tackle online advertising of fraudulent pension products.

Mark Barlow, head of member options at XPS Pensions Group, said: “We have seen fewer transfers and retirements over the past twelve months, so it’s no surprise that we’re now seeing an increase in activity as lockdown restrictions are eased.

"Whilst scam warning signs remain so high, and with no immediate prospect of laws combatting fraudulent online pensions adverts being strengthened, it’s as important as ever that trustees and employers take steps to support and protect their members.”

More in this category: « Financial Planner launches own women’s network Household wealth increases £900bn during pandemic »
back to top