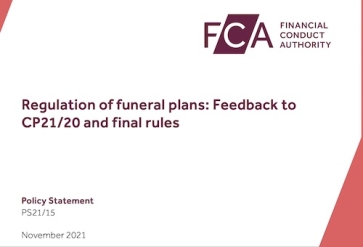 The FCA will regulate pre-paid funeral plans from July

The FCA has confirmed that it will begin regulating pre-paid funeral plans from 29 July.

The regulator says that once pre-paid funeral plans are regulated customers will be protected if their authorised plan provider fails.

Applications for authorisation for firms intending to remain in the market after 29 July 2022 opened on 1 September.

The FCA says its new rules in PS21/15 will provide continuity for customers where their plan provider fails, by allowing plans to be transferred to a new provider on the same terms as the original contract.

The new rules will:

• ban commission payments to intermediaries, such as funeral directors

• guarantee that funeral plans will always deliver a funeral unless the customer dies within 2 years of taking out the plan, in which case a full refund will be offered

• guarantee that customers will receive a full refund if they cancel a plan within 30 days of purchase, or pay only a reasonable charge later on

The rules will also ensure that consumers can receive compensation from their firm if a transfer to another provider is not possible.

Where a regulated provider fails and the Financial Services Compensation Scheme (FSCS) is involved, the new rules will also allow the FSCS to arrange continuity of funeral contracts or pay cash compensation to customers.

The new rules will apply from 29 July 2022 - the date the FCA will take over responsibility for regulating and supervising the pre-paid funeral plans market. Funeral plans are currently self-regulated by industry body the Funeral Planning Authority (FPA).

The watchdog says that consumers considering purchasing a pre-paid funeral plan before FCA regulation starts should look into their options carefully to decide whether the product is right for them.

Before FCA regulation begins on 29 July 2022, consumers will be unable to make a complaint to the Financial Ombudsman Service or make a claim to the FSCS. If their plan provider fails they will not be protected.

The FCA has published a a list of all known funeral plan providers and the status of their applications for authorisation.

• Details of the new rules are here

More in this category: « Govt Minimum Pension Age move wins praise Abrdn in talks to buy Interactive Investor for £1.5bn  »
back to top