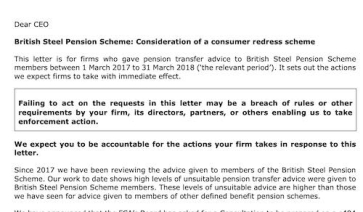 The FCA is to consult on launching a redress scheme for pension transfer victims of the British Steel Pension Scheme (BSPS) debacle.

Many of the BSPS members were targeted by financial advisers who helped them transfer their pensions, often with poor results.

In November The Financial Services Compensation Scheme opened its doors to compensation claims against three failed financial adviser firms who arranged pension transfers for members of the British Steel Pension Scheme (BSPS). They were the latest in a long line of failed adviser firms linked to BSPS transfers.

Problems occurred after British Steel decided to restructure its pension scheme with many members advised to transfer their assets from the BSPS's defined benefit scheme into a personal pension.

The FCA says the redress scheme would be limited to BSPS transfer advice.

The FCA has written a ‘Dear CEO’ letter to advisers setting out its expectations and warning them not to dispose of assets or avoid their responsibilities. The letter sets out expectations from firms who gave advice to BSPS members between 1 March 2017 to 31 March 2018.

The FCA says it will take action if firms attempt to avoid redress liabilities.

Tom Selby, head of retirement policy at AJ Bell, said: “Given the apparent industrial scale of pension transfer misselling in relation to British Steel pension scheme members, it was always likely a formal redress scheme would be needed to pay compensation. Thousands of British Steel members may have left their defined benefit (DB) pension against their best interests, putting their retirement at risk in the process.

“Although transferring out of a DB pension can make sense in certain circumstances, such a decision needs to be taken with great care and with the member’s best interests at heart. Sadly, it is increasingly clear that this was not the case in relation to many British Steel transfers.”

• Former BSPS members can find out how to complain at fca.org.uk/bsps.

More in this category: « 3 in 10 clients may be wrongly assessed on risk FNZ sells GBST platform to private equity firm  »
back to top