Register for Financial Planning Today website for FREE to view more stories and get our daily newsletters. Click on 2 stories to see Registration pop up.
Tuesday, 15 March 2022 10:45 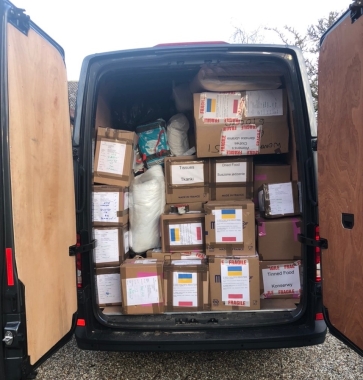 The duo made their way to Poland with 107 boxes in a 3.5tonne van

A duo from Chartered Financial Planning firm Perceptive Planning are en-route back from their trip to provide aid to refugees from Russia’s invasion of the Ukraine.

Shannon Currie, managing director and Chartered Wealth Manager, made time to talk to Financial Planning Today from the side of a Dutch road.

She has made the 1,500 mile trip with Phil Billingham, Chartered Financial Planner and director.

The pair aim to return home to Essex by the end of today with their journey followed by many Financial Planning professionals via social media.

Ms Currie said the firm started out gifting money to give assistance to the refugees but felt that not enough people from the UK were able to make the long journey with donations so wanted to do something more tangible.

She said after they told other people what they were doing “it ballooned” with generous donations coming from other Financial Planners as well as support partners and other local businesses and schools.

She said: “We even had a client and our tech support partner help pack the van.”

They were able to fit 107 boxes of targeted aid into a 3.5tonne van.

One of the biggest and most frustrating challenges faced by the Perceptive Planning team was the UK Border Guards.

They had heard that many vans and lorries were getting turned away at the UK border due to customs so the Perceptive team all spent many hours trying to solve the problem.

After a day and a half of the team emailing HMRC for guidance someone finally responded, when the team was advised that customs needed to treat them as a commercial shipment. Perceptive now has an export licence as a result!

However, Ms Currie said that the labelling that needed to be done for customs ended up being quite helpful for the volunteers on the ground.

“Everything had to be boxed up separately and well-labelled in Polish and English. It ended up being helpful to volunteers on the ground and they were extremely grateful for that. They are under so much pressure as volunteers for getting what is needed to people.”

Before setting off, the Perceptive team had identified a particular town on the Polish-Ukrainian border to head to which had posted lists of what refugees needed immediately.

Once the team had this list, they were able to be very targeted with the donations they requested.

After having delivered their initial donations, the pair travelled 60 miles back into Poland to visit a supermarket and restock donations using the remaining money which had been donated to them by other Financial Planners and local businesses.

Having asked volunteers what was needed, they purchased small water bottles, baby food and juice for children to take to the train station. Another wave of refugees had come in overnight after a town close to the border was bombed and children were struggling to drink from the oversized water bottles the volunteers already had.