Register for Financial Planning Today website for FREE to view more stories and get our daily newsletters. Click on 2 stories to see Registration pop up.
Friday, 17 June 2022 07:53 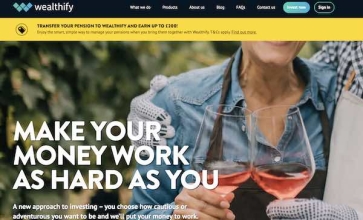 Wealthify is an independently run subsidiary of Aviva.

It has launched on Aviva’s adviser platform and will soon be available to all platforms.

The actively-managed ethical MPS range is available across a range of risk levels and product types.

Wealthify did not disclose the price at which platforms would offer the MPS but said the portfolios were available at a "low cost" for the adviser and client.

Wealthify’s approach to ethical investing excludes four core ‘sin sectors’: weapons manufacturing, gambling, tobacco and adult entertainment. It also looks to include ‘megatrends’ that will ‘accelerate the transition into a sustainable economy’.

Simon Holland, chief product officer at Wealthify, said: “We know ESG is popular with clients, and advisers are regularly being asked about ethical investments, but the ethical options for advisers are sparse. By opening our Ethical MPS up to intermediary platforms, we hope to give advisers more choice so that they can better serve their client needs.”

“We look forward to rolling this out to more platforms in the future.”

Wealthify said the expansion builds on its existing partnerships with Fintel and LGT Wealth Management.

Wealthify was launched by a tech entrepreneur and a Chartered Wealth Manager in April 2016 and acquired by Aviva in 2017. The service is available online or via an app. Wealthify is an independently run subsidiary of Aviva.

Other recent Aviva acquisitions include Financial Planning and wealth management firm Succession Wealth for £385m which is on track to complete in the second half of this year.

More in this category: « Langcat adds MPS to suitability software New CEO for AJ Bell as founder steps down  »
back to top