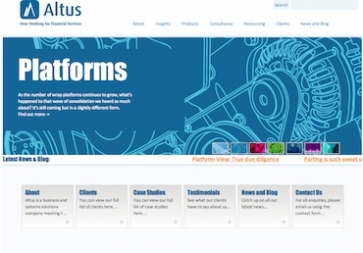 Altus website
The platform sector as a whole has moved into profitability for the first time, according to a new study, but the study's authors says there is no room for complacency.

In its summer white paper; 'The Platform Machine', the consultancy Altus drew attention to the cumulative losses of the platform industry between 2005 and 2011 based on the filed accounts of the top 20 platforms.
Following the publication of these findings, Altus suggested that the industry needed to tackle operational efficiency as a matter of urgency.
Altus consultants have now revisited the figures based on another year of company returns and concluded that the platform industry has nudged into a collective profit for the first time in its history.
However, Kevin Okell, head of consultancy at Altus, warned that in spite of this improvement, there is still no room for complacency.
Mr Okell said: "Although revenues grew a little slower than we'd predicted, expenditure actually fell slightly resulting in a small profit for the platform sector for the first time. Whilst some of this improvement may be down to changes in accounting practice, it does seem like the industry is heading in the right direction with over half of all platforms now reporting a profit.
{desktop}{/desktop}{mobile}{/mobile}
He continued: "There is still no room for complacency however. Whilst platform AUA grew by over 20% in 2012, revenue increased by less than 6%, clearly demonstrating the continued pressure on margins. The accounts we analysed relate predominantly to 2012, during which the average yield on platform assets under administration fell below 40bps – another less welcome first for the platform industry.
"That means costs must continue to come down and it will be interesting to see if the industry has managed to sustain the 2012 improvement when this year's accounts get filed over the next 12 months."
Altus provides a range of consultancy services to the financial services sector.
Last modified on Wednesday, 20 November 2013 09:15
Tweet
This page is available to subscribers. Click here to sign in or get access.
Published in Articles
Tagged under

More in this category: « 1 in 5 couples aged 40+ avoid retirement discussions AXA Wealth shakes up adviser service with major changes »
back to top