Register for Financial Planning Today website for FREE to view more stories and get our daily newsletters. Click on 2 stories to see Registration pop up.
Wednesday, 21 January 2015 11:51 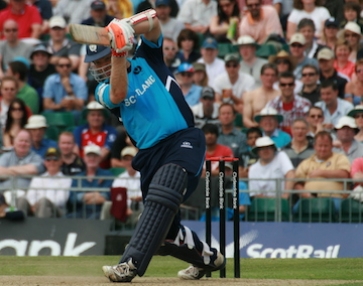 Ex-international player Douglas Lockhart
A former cricketer with World Cup experience and one of the leading cap winners for his nation has taken up a senior role at a Financial Planning firm.

Ex-international player Douglas Lockhart, said his sporting experiences had taught him plenty of skills, including resilience, which he would bring to his job at Tilney Bestinvest.
The Glasgow-based firm has announced he is being rehired and has appointed him as associate director.
Mr Lockhart, one of Scotland's most capped players ever, faced one of the most intimidating bowlers in the world during his cricket career - Pakistan player Shoaib Akhtar.
Yet, former wicket-keeper and batsman Mr Lockhart said the business world had showed him even tougher challenges.


He said: "The financial crisis of September/October 2008 was the toughest time I remember in my professional career and I certainly got less sleep during that time than the night before I faced Shoaib Akhtar, who was going to be bowling at 95mph."
He represented the national cricket team on 176 occasions, including 12 as captain, and he was a member of the Scotland squad for the 1998 Commonwealth Games and 2007 World Cup. He eventually retired from the sport in 2011.
Mr Lockhart said: "My cricket career taught me about the importance of hard work, resilience, teamwork, accountability and performing under pressure and these are all qualities which I have also aimed to bring to my business career."
Mr Lockhart has 13 years' experience in the investment management industry, having originally joined Tilney as a trainee in 2002 before moving to Barclays Wealth as a portfolio manager in 2010.
He is a Chartered Member of the Chartered Institute for Securities and Investments and holds a CISI Diploma.
His new role will include managing Sipp investment portfolios on a discretionary basis for clients introduced both by Tilney Bestinvest's own Financial Planners and external IFAs. He will also manage discretionary and advisory investment portfolios for individuals, families, trusts and pension funds, and establish relationships with professional firms.
He will be based in Tilney Bestinvest's Glasgow office and will report into Paul Frame, managing director.
Mr Frame said: "We are delighted to welcome Douglas back to the team in Glasgow. Douglas brings with him a great balance of experience and investment expertise in order to help our clients, who often require tailored investment solutions. Douglas's track record in delivering for clients means he is an ideal fit for the business."
Tilney Bestinvest's 33-strong Glasgow team has also appointed recent graduate Damian Dunn as a trainee investment manager. The firm is looking at expanding its Scottish team further.


Get FREE daily news summaries direct to your inbox. Sign up on the homepage now.

More in this category: « Trio of CFP professionals take up new director roles at wealth firm 1.5million small employers to get reminder letter on pension duties »
back to top