Register for Financial Planning Today website for FREE to view more stories and get our daily newsletters. Click on 2 stories to see Registration pop up.
Friday, 13 March 2015 00:00

FCA abandons plans to make firms use #ad on Twitter 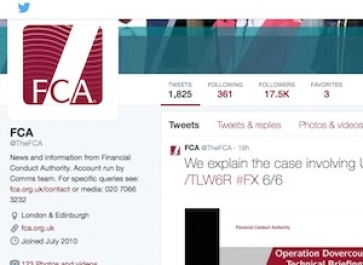 The FCA has abandoned plans to require firms to identify financial promotions on Twitter by using the hashtag #ad.


The regulator has this morning published its final social media guidelines for companies to avoid flouting rules on misleading financial promotions.
In August the FCA suggested for character-limited media the use of #ad in online posts would enable firms to comply with its requirement to make it clear that a "promotion is a promotion".
However, today, it said it would drop this idea, following feedback to its consultation.
Some respondents told the FCA it would be "an innovative way of highlighting that the content was promotional" but others suggested it was "an inappropriate use of the hashtag functionality".
The report stated there were also questions over whether hashtags would be appropriate for the inclusion of risk warnings – examples being #capitalatrisk, #pastperf - or to highlight jurisdictional limitations to products such as #UKinvestors.
The FCA said today: "Following this feedback we have revised our stance on this issue. We believe that hashtags are not an appropriate way to identify promotional content. We have therefore deleted the reference to #ad at paragraph 1.6 in the Finalised Guidance."
The regulator said it noted that paid-for advertising on several social media platforms already signpost that the content is promotional – with Twitter including statements such as 'promoted by' and Facebook stating 'SPONSORED'.

The FCA said in its report: "Therefore the additional use of '#ad' would not be required to identify the communication as promotional."
Officials identified that consumers will be led to a separate page when clicking on a hashtag displaying all the communications that have used the same one.
The FCA said: "These communications and their content will be outside the control of the firm. There is potential for consumer confusion here as the majority of the information will be irrelevant to the initial communication, although this may not be immediately obvious to the user.
"We appreciate that most promotions on social media will be self-evidently promotions and we would expect some type of signposting (ad / advert / promotion) only when the promotional nature is obscured or coupled with other material (e.g. a celebrity endorsement or journalistic content)."
The hashtag functionality is inappropriate for the inclusion of risk warnings or statement of jurisdiction, the FCA concluded.
The FCA said: "We appreciate that there may be positives to their use, such as improved prominence by the hashtag appearing as a coloured hyperlink. "However, we believe that the warning or information would be ultimately diminished by the running together of the words in undifferentiated text (e.g. #capitalatrisk) and by the link to another page with largely irrelevant material, with the result that the consumer does not effectively access the important information."

More in this category: « Social media: FCA delivers final guide on misleading promotions Ex-compliance director fined and given ban by FCA »
back to top