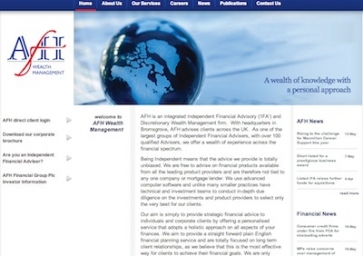 Advice firms in Derby and Blackburn have been bought out by AFH Financial for over £1m in total.


The £585,000 acquisition of Quest Financial Management, located in Derby, involves an initial cash payment upon completion of £292,500.

AFH, which described itself as a Financial Planning led investment management firm, said two Quest advisers have left the business.

Existing AFH advisers have taken over their client relationships.

Phoenix Independent Financial Services, a Blackburn based IFA, has also been taken over for £489,345.

The initial consideration has been satisfied by a cash payment upon completion of £240,250, with the rest of the takeover fee being dependent on performance.

The deals brings the number acquisitions since the company listed on AIM in June 2014 to 12.

They will add approximately £320,000 of recurring revenue, AFH said.

Alan Hudson, chief executive of AFH, said: "Following the acquisition of Independent Financial Services at the end of April we continue to offer IFA businesses the opportunity to either become part of a larger group or to allow the principals of those businesses the ability to realise value as they retire.

"These are the eighth and ninth acquisitions made during this financial year which has seen AFH continue to leverage its centralised administration and support functions to develop its expansion nationally."

More in this category: « Pension fraud losses reported to triple to £5m since reforms FSCS bill nearly triples to £20m for wealth management firm »
back to top