Register for Financial Planning Today website for FREE to view more stories and get our daily newsletters. Click on 2 stories to see Registration pop up.
Friday, 15 January 2016 08:48 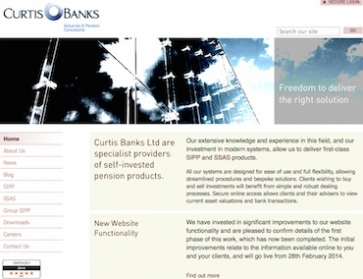 Legal & General Group has sold off Sipp provider Suffolk Life to the expanding Curtis Banks Group plc for £45 million. The move will double the size of Curtis Banks.

L&G says the acquisition by Curtis Banks is subject to an underwritten placing by Curtis Banks Group plc, and regulatory approval, and both of these are expected in the first half of 2016.

Chris Banks, executive chairman of Curtis Banks Group plc, said: "We are delighted to announce the acquisition of Suffolk Life which accelerates our strategy of becoming the leading full Sipp provider in the UK.

“Suffolk Life is one of the oldest and most respected brands in the Sipp industry, with an excellent reputation for service and professionalism. We are delighted that Legal & General has chosen us to take ownership of this business and believe this reflects our strong standing and market reputation.”

Mark Gregory, group chief finance officer at L&G, said: “Legal & General is delighted to have played a part in the success of Suffolk Life. It is a great business, but it is not core to our focused strategy going forward. Teaming up with Curtis Banks will help it to realise its strong potential, by creating one of the UK’s largest Sipp providers.”

Suffolk Life administers around 26,500 plans, including 3,600 commercial properties. Assets under administration were £8.7 billion as at 30 November 2015. The business was established in 1971 and is based in Ipswich.

Legal & General says it is disposing of non-core businesses and focusing on core activities where it believes it can achieve significant scale and attractive returns on capital. It disposed of Legal & General France, Legal & General Ireland and Egypt in 2015.

Curtis Banks said it was “delighted” to announce that contracts were exchanged on 14 January 2016 to acquire the Suffolk Life group of companies from Legal & General.

The acquisition of Suffolk Life is conditional on approval by the FCA and PRA and we expect this to be received by the end of March. In the meantime Suffolk Life continues as a separate business as part of the Legal & General Group.

There are no current plans to change existing offices, says Curtis Banks. However, over time the systems at Suffolk Life will be standardised with those of Curtis Banks.