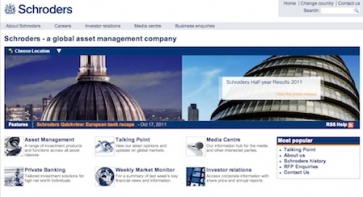 The chief executive of Schroders will step down from his position after 15 years with the company and will take up a non-executive chairman role on the board.

Michael Dobson, who has been chief executive since 2001, will be succeeded by Peter Harrison on 4 April. Mr Harrison joined Schroders in 2013 as head of equities and became a board member and head of investment in 2014.

He has worked in asset management for a number of years and has a deep knowledge of Schroders' culture and values, having joined the firm as a graduate in 1988 and then re-joining Schroders in 2013.

Andrew Beeson, who has been chairman for the last four years and a member of the Board since 2004, will also retire on 4 April 2016.

As well as this, Massimo Tosato who is currently executive vice chairman and global head of distribution, will retire as a director of the company and leave the firm on 31 December 2016. He joined Schroders in Milan in 1995 before relocating to London in 1999 and was appointed to the Board in 2001 holding numerous senior positions within the firm.

Ashley Almanza, who joined the Board in 2011 as a non-executive director and is currently chairman of the Audit and Risk Committee, has informed the Board that due to his commitments as chief executive of G4S, that he will not be seeking re-election and will therefore leave the Board at the forthcoming Annual General Meeting on 28 April.

Rhian Davies will succeed him and become Chairman of the Audit and Risk Committee at the conclusion of the AGM.

The Board is said to be mindful of the UK Corporate Governance Code's provisions and believes these appointments are in the best interests of the company and its shareholders. The company said that the appointments have come after a long-term focus on succession planning as well as careful consideration and consultation with major shareholders.

Lord Howard, the senior independent director, said: "We are delighted that Peter Harrison will succeed Michael as chief executive. Peter has great experience of the investment industry and a deep knowledge of the firm, its culture and values.

"Michael Dobson is the outstanding candidate for the chairman role and the Board's unanimous choice. Michael has been an exceptional leader of the business for over 14 years.

"On behalf of the Board, I would like to thank Andrew Beeson for his significant contribution to Schroders over the past decade including the past four years as chairman. We wish him the very best for the future.

Andrew Beeson said: "It has been a privilege to serve on the Board of Schroders for over 11 years. As I look back on my time at the company I believe it has never been in a stronger position than it is today. Michael and Peter will make a formidable team and the firm could not be in more capable hands."

More in this category: « Six firms under FCA investigation over customer treatment Workplace pension scheme membership rises to 64% »
back to top