Register for Financial Planning Today website for FREE to view more stories and get our daily newsletters. Click on 2 stories to see Registration pop up.
Thursday, 26 May 2016 09:56 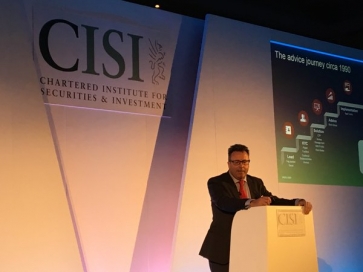 Technology 'disrupters' will change the face of financial planning over the next few years but Paraplanners will continue to be in demand, predicts Colin Sloss, senior business development manager at technology firm IRESS.

Mr Sloss told the CISI Paraplanning Conference today that major 'disrupters', such as robo and digital advice providers, new entrants and recent entrants to the financial services sector would be part of a 'mega-trend' in the same way that Uber had done to taxis but no single channel would dominate, instead there would be an 'omni channel' approach to financial planning.

He told Paraplanners: "I believe Paraplanners have a big role to play in how digital advice is delivered.  Expect a world of omini channel advice with face to face, digital and so on and become that point of digital aggregation. Improve your client experence in a visually stunning way offering clients easy access to their provider."

"Paraplanners will remain an intrinsic and valuable part of the Financial Planning process but current software tools need to be more joined up. Disrupters will continue to emerge and complacency is not an option."

Research, however, suggested that much would depend on how efficient the client portal was as clients would expect more, he said.

He warned that the current ways of Paraplanning and Financial Planning were often disparate and 'unjoined-up'. Too much paper was still involved and re-keying was still a key element in the process and this had to change. Digital entry by the client was one way forward.

He added that IRESS research showed that what clients wanted from fintech was the ability to see all their finances in one place including their mortgage, investments and pensions. The Pensions Dashboard plan would help but more was needed.

While he thought robo-advice was over-talked about it was already a rapidly expanding market and several major providers such as Schroders, Aberdeen and Fidelity were already taking stakes and making investments in robo-advice type companies.

For Paraplanners he said however: "Robo advice is not the be all and end all, the real challenge is how we engage with our clients more efficiently. Think about he number of systems you use in your practice and think how much more efficient it would be if you had one system."

In terms of clients attitude to techology he said one misconception is that younger people were more likely to use technology and nothing else to run their finances. He said actually the differentiator was income. Better off and wealthier people were the most likely to run their finances with technology or expect to use it to monitor their investments.

Mr Sloss was one of the keynote speakers at the CISI Paraplanner Conference 2016 this morning, speaking to over 100 delegates.

Follow what delegates are saying by using the hashtag #paraconf and see our Twitter feed below for all comments.

More in this category: « Marginal change leads to big improvements, Paraplanners hear Size of firm no excuse for poor diligence - FCA's Hewitt »
back to top