Register for Financial Planning Today website for FREE to view more stories and get our daily newsletters. Click on 2 stories to see Registration pop up.
Monday, 03 October 2016 08:37

Henderson and US manager Janus merge to create £248bn group 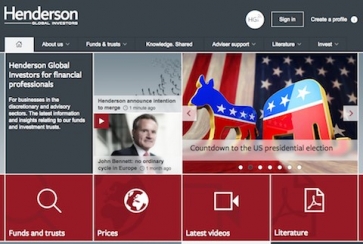 UK fund manager Henderson Group and the Denver-based US manager Janus Capital Group are to join forces with the new group, to be called Janus Henderson Global Investors.

The “merger of equals”, a term used by the combined group, will form Janus Henderson Global Investors, a global active asset manager with assets under management of more than £248bn and a combined market capitalisation of approximately US$6bn
The combined company says that Janus' strength in the US markets will be combined with Henderson's strength in the UK and European markets to create a global manager with a geographic footprint which closely matches the global fund management industry.
Henderson and Janus CEOs will lead Janus Henderson Global Investors plc together and the combined group will apply for admission to trade on the NYSE as its primary listing, retaining Henderson's existing listing on the ASX. Janus' largest shareholder, Dai-ichi Life, supports the merger.
Financially, the merger will be undertaken via a share exchange with each share of Janus common stock exchanged for 4.7190 newly issued shares in Henderson. Henderson and Janus shareholders are expected to own approximately 57% and 43% respectively of Janus Henderson Global Investors' shares on closing, based on the current number of shares outstanding. The merger is currently expected to be concluded in the second quarter of 2017, subject to shareholder and regulatory approvals.

Andrew Formica, chief executive of Henderson, said: "Henderson and Janus are well-aligned in terms of strategy, business mix and most importantly a culture of serving our clients by focusing on independent, active asset management. I look forward to working side-by-side with Dick, as we create a company with the scale to serve more clients globally, as well as the strength to meet their future needs and the growing demands of our industry."
Dick Weil, chief executive officer of Janus, said "This is a transformational combination for both organisations. Janus brings a strong platform in the US and Japanese markets, which is complemented by Henderson's strength in the UK and European markets. The complementary nature of the two firms will facilitate a smooth integration and create an organisation with an expanded client-facing team and product suite, greater financial strength, and enhanced talent, benefiting clients, shareholders and employees."
The combined organisation will have 2,300 employees, based in 29 locations around the world. Among staff changes, Janus' head of Investments, Enrique Chang, will become global chief investment officer and Henderson's global head of distribution, Phil Wagstaff, will become global head of distribution.
The £25m share buyback of Henderson shares, scheduled to take place in the second half of 2016, will no longer take place. As at 30 June 2016, Henderson had total assets of £1,876.1m and £220m underlying profit before tax in the financial year ended 31 December 2015.

Mark Dampier, head of Investment Research at Hargreaves Lansdown: "On the face of it, the deal makes a lot of sense and the groups complement each other. Scale can help keep costs down for fund groups, allowing them to offer more competitive fund pricing, while still delivering good active performance. The fund management industry is polarising, with the likes of Henderson and Janus seeing the benefits of scale at one end, and smaller boutique fund management groups focusing on niche propositions at the other. Those in the middle will need to be on their game to keep up.

"Generally I’m not a huge fan of mergers as it can unsettle fund managers, and we will be monitoring the situation closely on behalf of our clients. However in the short term investors have nothing to worry about, as it will be very much business as usual for the time being."

More in this category: « Planner fears phone recordings rule may damage firm's image Financial Planning firm taken over by AFH »
back to top