Register for Financial Planning Today website for FREE to view more stories and get our daily newsletters. Click on 2 stories to see Registration pop up.
Monday, 02 October 2017 12:29 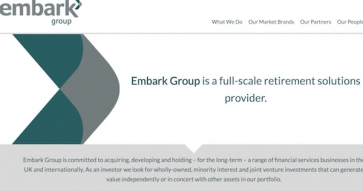 The acquisitive Embark Services Group, which has taken over platform and Sipp firms, reported pre-tax losses widening last year from £1.46m to £2.36m.

The firm blamed one off expenses from acquisitions and says its SIPP and SSAS business grew strongly and assets under administration also rose although company revenue dipped from £11.26m to £9.97m in the year ended December 2016.

While it is reluctant to commit to further major acquisitions in the short term it hasn’t ruled out these. It expects further consolidation in the SIPP sector due to higher capital requirements and increased regulation.
Staff numbers fell overall from 213 in 2015 to 184 in 2016 and wages and salaries fell from £6.9m to £5.6m although salaries and fees paid to directors rose from £490,000 to £574,000. The earnings, pensions and benefits of the highest paid director rose from £195,000 to £248,000.

Director Phil Smith, writing in the reports and accounts, said the group maintained its focus on becoming “one of the leading and global retirement solutions providers in the UK.”

He said the group had continued its strategy of changing its distribution to move away from being wholly reliant on IFA business and had cut back on exposure to smaller distribution relationships and investment counterparts.

He said: “The company maintained its position in the pension administration market with turnover in the year at £9.98m, an 11.5% reduction primarily driven by the decline in treasury income and marginal price reductions driven by external factors. We have seen full maintenance of our fee revenues and service levels whilst operating costs remained tightly under control, despite our continued removal of legacy schemes which carry an inappropriate risk profile.

“Alongside this, we have continued to invest heavily across our business. This has resulted in continued change in people, process, and underlying technology. Investment in our core technology platform resulted in a £0.93m amortisation cost to the income statement this year alone. We also completed the migration of the legacy SIPP portfolio on to the new administration platform.

“As at the end of 2016, the management team feel that all risks are under control and do not hamper the business's ability to operate and grow safely.”