Register for Financial Planning Today website to get our daily newsletters. Click on 2 stories to see the Registration pop up.
Monday, 01 October 2018 11:00 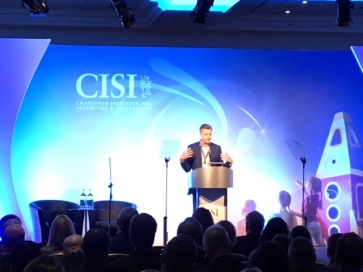 The two-day event, headlined ‘Changing Lives,’ is taking place this year on 1 and 2 October at the Hilton Birmingham Metropole Hotel at the NEC, a move from the usual venue of Celtic Manor Resort in South Wales where it’s been for the past decade.

He said it was hugely impressive that there was now a global community of more than 175,000 CFP professionals who were being encouraged to support World Financial Planning day this week.

Mr Cole-Fontayn said new initiatives were being planned to help the profession develop including a new Financial Planning mentoring scheme due to be unveiled by CISI head of Financial Planning Jacqueline Lockie CFP later in the conference.

Speaking at the beginning of the conference Martin Ruskin CFP, chairman of the CISI Financial Planning Forum Committee, said he had been a proud supporter of the profession since the Institute of Financial Planning days. In 2015 the IFP merged with the CISI.

Mr Ruskin said that despite the best efforts of the IFP Financial Planning had remained a "cottage" profession for too long and the IFP had struggled to grow numbers.

He admitted the "elephant in the room" today was the difficulty the CISI had had in growing CFP numbers since the merger and admitted that CFP numbers had dipped due to issues such as retirement, people leaving and competition. There are approximately 1,000 CFP professionals in the UK.

He said despite the drop he remained confident in the growth of the profession and said there were positive plans by the CISI and other groups such as the PFS, Back2Y, NextGen Planners and others which would help expand the profession.

He added: "The bottom line is I'm still here and I still believe and across the UK we have a whole lot of others who believe."

He was speaking as the two day event got under way in buoyant mood.

The CISI says the new central venue at the NEC is designed to give more people a chance to attend for one or both days.

There are numerous distinguished keynote speakers, three concurrent streams and a Gala Awards dinner as well as a large exhibition area.

Keynotes include ‘Financial Wellness – it’s our obligation’ by Susie Logan, brand and marketing director, Standard Life and ‘The evolution of workplace savings and the true value of advice’ by Ronnie Taylor, chief distribution officer, Aegon UK

Three streams will cover: Focus on Your Clients, Spotlight on Your Business and Get Ahead Technically.

• Financial Planning Today will be reporting throughout the event - check out our coverage on Monday and Tuesday.

More in this category: « Hundreds set to head to CISI Financial Planner Conference New look CFP and other changes coming from CISI »
back to top