Register for Financial Planning Today website for FREE to view more stories and get our daily newsletters. Click on 2 stories to see Registration pop up.
Thursday, 11 October 2018 09:04 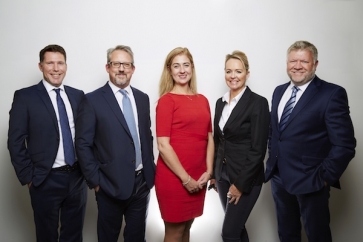 The team, which on average have more than 25 years’ experience in wealth management and private banking, will be based in Tilney’s office in New Street Square, London.

It comprises Joanna Hunt, Stephen Bristow, David Man, Stewart Richardson and Tracy Browne, who have joined Tilney as directors of investment management from a number of private banks and wealth managers, but previously worked together at Citi Private Bank and Coutts.

The team will be headed up by Joanna Hunt who joined Tilney from LGT Vestra where she has worked in the private office since 2015.

David Man and Stewart Richardson are founding partners of RMG Wealth Management where they have worked since 2009, managing portfolios for wealthy investors, family offices and institutional clients on an absolute return basis.

Prior to that she was a director at Citi Private Bank and spent 20 years at Coutts where she was a senior private banker.

Miles Robinson, Tilney’s head of investment management in London, said: “We are delighted to have reassembled what is undoubtedly one of the UK’s most highly-experienced teams focused on supporting wealthy individuals and their families.

“Successful entrepreneurs, senior business leaders and wealthy families typically have complex financial affairs and require a completely tailored approach to managing their investments, often working alongside their other professional advisers.

“Our new team have been totally immersed in advising some of wealthiest individuals and families in the UK for decades and each of them has a deep understanding of the requirements of high value clients.”

He added: “At Tilney they will be wholly focused on delivering an outstanding and completely personalised service to small number of very wealthy clients.”

More in this category: « Chartered bodies call for FCA to beef up Directory plans  Sex offender adviser’s firm goes into administration »
back to top