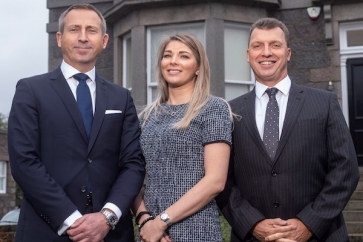 Wealth manager Charles Stanley has strengthened its presence in Scotland with the opening of a new office in Aberdeen, which will be headed up by a Chartered Financial Planner.

The new office will be located at 26 Carden Place.

It will sit alongside the firm’s Edinburgh team and increases its regional network to 25 branches.

The move includes the appointment of a new team which will be headed up by Scott Morrison, director of Financial Planning.

He was appointed in September and reports into John Redpath, executive director of Financial Planning in Edinburgh.

He is working alongside Linda Edward who joined as a Paraplanner in June 2018 and they have both been working in the Edinburgh branch while waiting for the new Aberdeen office to open.

The firm says the office “has the capacity for the team to grow” and Charles Stanley is currently recruiting for more Financial Planners and investment managers.

Mr Morrison, a Chartered Financial Planner joined from Tilney where he was a partner and spent 20 years working in its various entities.

He deals with clients throughout the North and North East of Scotland, including Inverness and the Shetland Isles.

Clients include partners of law and accountancy practices and professionals in the oil and gas sector.

Ms Edward is a Chartered Financial Planner with more than 15 years of experience and also joined from Tilney, where she worked for 10 years.

She is experienced in producing cashflow analysis for clients, and dealing with complex Financial Planning needs, including advice on defined benefit pension schemes.

Andrew Meigh, managing director of Financial Planning at Charles Stanley, said:  “Aberdeen is one of Scotland’s largest cities and the launch of this new office sends a strong signal about our serious intentions to develop and grow our business in Scotland, where we see significant opportunity.

“I am delighted that Scott and Linda have joined the team as they both have excellent track records of providing high-quality advice as part of close client relationships.

“They are joining at an exciting time when Charles Stanley is on a clear growth trajectory.

“We look forward to continuing to build the team in Aberdeen in this exciting phase in the development of our business, as well as growing our overall financial planning offering across the UK.”

Earlier in the year Charles Stanley appointed John Redpath, as well as Chartered Financial Planners, Julie Combie and Barry McGowan, in Edinburgh to boost its Financial Planning capability in Scotland.

More in this category: « Talbot and Muir calls for standardised NSI reporting Health and wealth fears top retirement worries list »
back to top