Register for Financial Planning Today website for FREE to view more stories and get our daily newsletters. Click on 2 stories to see Registration pop up.
Thursday, 13 December 2018 10:52 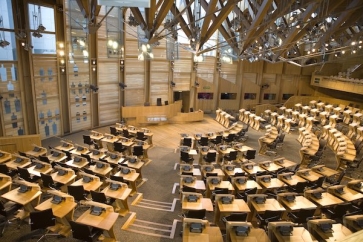 The Scottish Budget yesterday increased the extra income tax burden for many in the country.

Scottish taxpayers will start paying the higher rate tax on earnings £6,570 sooner than the rest of the UK.

There was a silver lining for pensions savers, however, as pensions tax relief is granted at the individual’s highest marginal income tax rate and may mean more tax relief can be claimed by Scottish higher rate taxpayers.

This means someone in Scotland earning above £43,340 will be entitled to claim 41% tax relief on their pension contributions above this threshold, whereas someone earning the same in the rest of the UK would be entitled to only 20% tax relief.

For this individual in Scotland, a pension contribution of £6,570 would avoid them paying higher rate tax entirely.

Steven Cameron, pensions director at Aegon, said: “The latest Scottish Budget has confirmed that many of those living north of the border will be paying substantially more income tax than someone on equal earnings in the rest of the UK.

“In his October Budget, the UK  Chancellor announced that from April, those earning up to £50k would not pay higher rate income tax.

“But as income tax bands and rates are ‘devolved’, this didn’t apply to workers in Scotland.

“The Scottish Financial Secretary has now dashed hopes of an equivalent rise for Scots, leaving the higher rate tax threshold unchanged at £43,430, £6,570 lower than in the rest of the UK.

“This means people in Scotland start paying higher rate tax on earnings £6,570 sooner than their counterparts elsewhere in the UK.

“Many also pay income tax at higher percentage rates, which for those earning above £43,430 is 41%.”

“This is a significant sum and will increase pressure on the Scottish Government to demonstrate what extra services Scottish taxpayers are receiving for the difference.

“This is particularly relevant as the minority Scottish Government needs the backing of other Scottish parties to ‘pass’ its Budget. 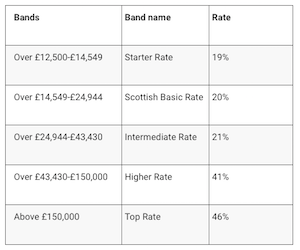 “To make matters worse, Scots face a double whammy because in line with the rest of the UK, they will pay National Insurance at a rate of 12% on earnings up to £50k, before this reduces to 2% on earnings above this level.

“So from next April, a Scottish resident earning £50k or above will pay an extra £340 per year in National Insurance.

“While this will also be the case across the UK, someone earning £50k in the rest of the UK, is saving £860 a year in income tax, giving them a boost to take-home pay of £520 a year from next April compared to currently.”

On pensions, Mr Cameron said there was also the option to allow individuals to ‘sacrifice’ part of their salary in return for this being paid as an employer contribution into their pension.

He said: “This has the further benefit of meaning the individual doesn’t pay NI on the amount sacrificed.

“Someone earning £49,999 paying pensions contributions through salary sacrifice could save not only 41% income tax but also 12% National Insurance.”