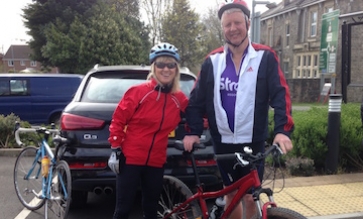 Nick Cann CFP, the former chief executive of the Institute of Financial Planning, has been honoured with a British Empire Medal (BEM) in the New Year Honours’ List.

Mr Cann, who suffered a major stroke seven years ago, received the award for services to the local community, particularly stroke charities.

He was among more than a dozen people connected to financial services who were honoured including former Royal Bank of Scotland chief executive Ross McEwan.

The Institute of Financial Planning, the original UK provider of the Certified Financial Planner designation in the UK, merged with the Chartered Institute for Securities & Investment in 2015.

Mr Nick Cann, 56, has supported local charities and community groups since suffering a stroke, which caused aphasia - a major loss  of speech, as he was lecturing students in Northampton about careers in Financial Planning.

Since his illness he was been a tireless fund raiser and has raised £120,000 for Monmouthshire Aphasia Phoenix Project and the Strike a Chord choir in Cwmbran. He has also spoken, with the help of slides and music, at a number of financial services events about life since his stroke.

Mr Cann, who lives in Monmouthshire, is still recovering from his stroke and continues to be supported by the Stroke Recovery team at the Stroke Wales Association in Caerphilly.

He said: “I am honoured and grateful to receive the British Empire Medal. I could not have done it without my wife, Jo, and my three children Jemma, Rhys and B