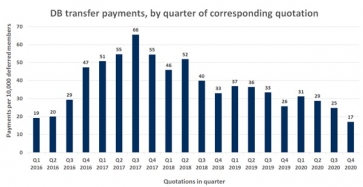 The ban on contingent charging and the pandemic have resulted in a major slump in pension transfers, according to new research.

Pension consultant LCP says only 15% of those who received a pension transfer quote in Q4 2020 went on to transfer their pension.

The FCA introduced a ban on contingent charging on pension transfers in October 2020, stopping the practice of some advisers charging a fee for advice only when a transfer went ahead.

For its research LCP tracked the proportion of its Defined Benefit pension scheme members who transferred out each quarter since the start of 2016, based on a sample of more than eighty schemes administered by LCP.

LCP’s data revealed that the proportion of members transferring out is now back to levels not seen since the introduction of the Pension Freedoms in 2015 and stands at only a quarter of the peak in Autumn 2017.

It believes two factors have combined to drive transfer activity to a new low: fewer people requesting transfer value quotations and a smaller percentage of people going on to transfer after receiving a quote.

In the fourth quarter of 2020 only 116 members out of every 10,000 requested a quotation, barely half the rate in the Summer of 2017. Lockdown could be a major factor here, believes LCP, along with a declining number of advisers willing to give transfer advice in the face of increased FCA scrutiny and concern about unsuitable pension transfers.

LCP said: “As a result, pension scheme members who obtained quotes may have found it hard to find an adviser and/or may have been put off by the risk of paying thousands of pounds for transfer advice only to be recommended not to transfer.”

Bart Huby, partner at LCP, said: “A range of factors has combined to drive down volumes in the DB transfer market.  Lockdown has clearly reduced activity, but even where people do ask for a transfer quote they are now far less likely to turn that into a pension transfer.