Register for Financial Planning Today website for FREE to view more stories and get our daily newsletters. Click on 2 stories to see Registration pop up.
Wednesday, 17 November 2021 08:44 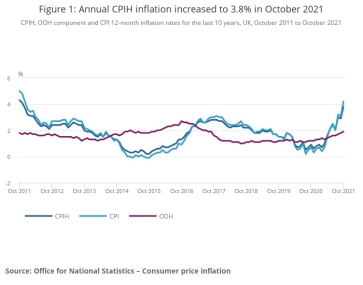 The sharp rise came after a surprise dip in CPI by 0.1 percentage points to 3.1% in September.

The sharp rise is likely to increase pressure on the Bank of England to increase the base rate, with a rise possible before Christmas.

Bank of England Governor Andrew Bailey has already warned that inflation could top 5% next year. Inflation in the US recently reached 6.2%.

Industry reaction to the jump in CPI and CPIH has been one of concern.

Richard Carter, head of fixed interest research at Quilter Cheviot, said: “At 4.2%, this is the highest 12-month inflation point since November 2011, up from 3.1% in September. The main contributor comes from electricity, gas and other fuel price increases, which are particularly sharp given the government’s increase in the energy price cap in October, on top of the previous cap increase in April 2021.

“12-month inflation rates for electricity and gas stand at a staggering 18.8% and 28.1% respectively, the highest annual rates since 2009. With petrol prices the highest since September 2012, motor fuel price hikes were also a big contributor to the elevated CPI numbers. All these goods registered price reductions as the pandemic began in March and April 2020.

Dan Boardman-Weston, CIO at BRI Wealth Management, said: “Inflation came in at 4.2% in October up from a reading of 3.1% in September and the highest level in nearly a decade. The rise was a little ahead of forecasts of 3.9% and was predominantly driven by household energy bills, the price of fuel at the pumps and the cost of restaurants and hotels.

"The level of inflation is going to keep getting worse over the coming months as supply stays stretched, demand stays robust and base effects technically push the rate of inflation higher. This is undoubtedly going to put pressure on the Bank of England to raise rates, which we suspect they will have to do in the next few months given the high levels of inflation and robust labour market.

"Nothing we see leads us to believe that this inflation is permanent and as we start heading into Spring next year the figures will start falling rapidly. The Bank of England needs to be careful that they’re not too hasty in tightening monetary policy as a policy misstep could do more harm to the economy than this transitory inflation we are witnessing.”

Andrew Tully, technical director at Canada Life, said: "Inflation rising to 4.2% is another damaging blow to households and families up and down the country who have already been struggling to balance the books in the face of soaring costs for petrol, energy and other basic items. Not only will this have an effect on those pensioners with fixed incomes who will see their spending power continue to fall.

"We could also see people start to deprioritise their pension saving as wages are made to stretch further to cover rising costs. If inflation continues to grow unchecked we could start to see the undoing of some of the great strides forward made by auto-enrolment.”

Colin Dyer, client director at investment provider abrdn, said: “The cost of living has been increasing rapidly for much of 2021 because of the strong economic recovery from the coronavirus pandemic, but October’s inflationary rate is the highest we’ve seen in over a decade. And with the Bank of England now warning of it exceeding 5% early next year, it’s likely to remain an uncertain and uncomfortable period for many.

“For those trying to save, rumours of a rate rise on the horizon might seem positive, but this is unlikely to be substantial enough to show any real returns. As such, savers should ensure they are doing all they can to keep up with inflation rates and secure longer term positive growth.”