Register for Financial Planning Today website for FREE to view more stories and get our daily newsletters. Click on 2 stories to see Registration pop up.
Wednesday, 20 July 2022 08:17 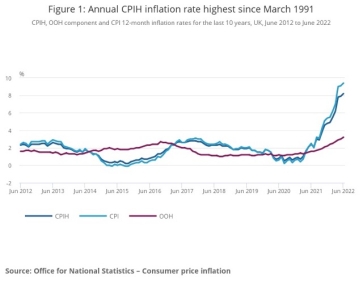 The Consumer Prices Index (CPI), the government’s main measure of inflation, jumped from 9.1% in May to 9.4% in June.

Inflation is now at its highest level for 40 years.

Soaring fuel costs, including gas and electricity prices, were mostly to blame for the increase.

The older Retail Prices Index, still used for many pension calculations, rose from 11.7% in May to 11.8% in June.

ONS chief economist Grant Fitzner said: “Annual inflation again rose to stand at its highest rate for over 40 years. The increase was driven by rising fuel and food prices, these were only slightly offset by falling second-hand car prices.

“The cost of both raw materials and goods leaving factories continued to rise, driven by higher metal and food prices respectively. These increases saw raw materials post their highest annual increase on record, with manufactured goods at a 45-year high.”

Industry experts expect inflation to peak at around 11% in the autumn and some forecasters are predicting a slow decline next year. In the meantime, many say the inexorable rise in inflation is punishing savers and investors, many struggling to maintain returns. Households are also being hit the rising cost of goods and services.

Rob Morgan, chief investment analyst at Charles Stanley, said: “Central banks underestimated the inflationary impact of money creation during the Covid era, wrongfooted perhaps by the patchy and intermittent economic recoveries from lockdowns. They could hardly have foreseen, nor can they do much about, the compounding effect of supply chain problems and the Russian invasion of Ukraine, which has driven up energy and food prices further.

“Yet now they are determined to vanquish inflation, and that means higher interest rates, potentially for some time to come, though they will likely lag behind the rate of inflation, meaning a negative ‘real’, or inflation-adjusted, return on cash. This makes for a difficult investing environment. On the one hand, investors are trying to hedge against, or even benefit from, higher inflation. On the other, a collapse in demand may lie ahead as higher prices take their toll.

“While better times will return, investors need to be prepared for choppy markets in the short term. To navigate these waves, it’s vital to ensure investors have a diversified portfolio and hold their nerve.”

Matt Roche, associate investment director at Killik & Co., said: “With inflation expected to reach 11% by autumn, the purchasing power of savings in bank accounts is being rapidly eroded. In this environment, savers should look at investing as a means of inflation proofing their money."

Martin Lawrence, director of investments at Wesleyan, said: “Rising food and fuel costs have kept inflation red hot this month. This is intensifying the pressure on already stretched pockets and making it increasingly challenging for many households to afford the essentials.

“As the Conservative Party races to appoint a new leader, all eyes will be on the new leader to see just how they plan to help tackle inflation and the economic challenges laid out before them."

Sarah Coles, senior personal finance analyst at Hargreaves Lansdown, said: “Inflation has hit another 40-year high, powered by horrible rises in the price of energy, fuel and food. These are not only the kinds of costs that we find incredibly difficult to cut, they’re also the ones which are less likely to be controlled by higher interest rates. And price rise pain is far from over, because the Bank of England expects it to peak at 11% in October.

“The Bank of England will be feeling the heat of the past few days and has a very difficult job on its hands to ensure the economy has a soft landing. Recession fears are growing by the day and if more extreme interest rate rises are required, this could easily tip the economy into contraction. The financial pressure on consumers is only going to get more intense over the coming months and especially when we get the latest energy price cap later this year. However, the BoE has to balance that with the need to get inflation down and given its persistence it may feel it has no choice but to act strongly now.”

Colin Dyer, client director at abrdn, said: “With the Bank of England expecting it to be two years or more before inflation returns to the Government’s 2% target, the nation’s finances could be strained for the sometime.

Andrew Tully, technical director, Canada Life, said: “Today’s inflation numbers are a further hammer blow to households right across the UK, who will be left reeling from the continuing surge in prices for everyday items. With wages officially lagging way behind the cost of living, how long inflation remains high will determine our living standards for years to come.”

More in this category: « FCA misses communication and authorisation targets Turnover rises 36% for Lancashire adviser »
back to top