Register for Financial Planning Today website for FREE to view more stories and get our daily newsletters. Click on 2 stories to see Registration pop up.
Friday, 20 December 2013 10:37 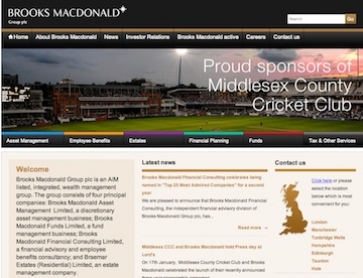 Wealth management group Brooks Macdonald has signed an agreement with Levitas.
Brooks has until August next year to decide whether to go ahead with the move.
The decision will rest on Levitas' performance.
The put and call option agreement means Brooks has the right to purchase the company for an equivalent 3% of Levitas assets as they are on November 1 2018 – with £24m the maximum figure that could be paid.
If Brooks has not decided to proceed with the purchase by the end of a three week window between July and August 2014 the agreement will expire.
Levitas is the sponsor of two funds - TM Levitas A and TM Levitas B – which were launched in July 2012.
Assets under management are £60.52m but are expected to increase to £150m by 30 June 2014 and to £250m by 30 June 2015. Brooks is the investment adviser to the funds.
{desktop}{/desktop}{mobile}{/mobile}
In a statement Brooks said: "The purchase of Levitas will enable Brooks to extend its investment proposition while further enhancing its ability to meet a range of client attitudes to risk.
"The group expects Levitas to achieve significant growth over the next five years and be earnings enhancing in the next financial year."
Craig Knight, director of Levitas, said: "Having worked with Brooks on the launch of our funds, we are delighted to transition them to Brooks' ownership and are confident that this development will be in the best interests of Levitas, our shareholders and the investors in our funds."
In the eighteen-month accounting period ending 31 December 2012, Levitas reported a profit before tax of £6,713 on revenues of £52,478.
Brooks will incur costs of £150,000 in the year ending June 2014 to complete the transaction.
Tweet
This page is available to subscribers. Click here to sign in or get access.
Published in Articles
Tagged under