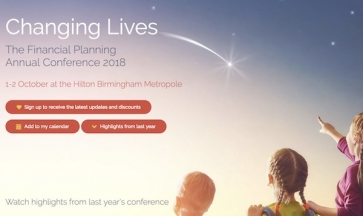 The CISI Annual Financial Planning Conference 2018 will take place this year at the Hilton Birmingham Metropole at the NEC on 1 and 2 October under the theme of 'Changing Lives.'

The CISI is moving its annual Financial Planning Conference - one of the biggest events in the Financial Planning calendar - to Birmingham after nearly 10 years at the 5 Star Celtic Manor Resort in South Wales. The new venue is in the same location as last year's PFS Festival of Financial Planning which attracted more than 3,000 attendees although it's not clear if the NEC itself will be used, as it was for the PFS event, or just the hotel.

The CISI Annual Financial Planning Conference was run by the Institute of Financial Planning until its merger with the CISI in 2015 and has been held at the Celtic Manor Resort near Newport, South Wales, since 2007. Following the merger, the IFP Forum within the CISI has been responsible for the event.

The annual CISI Financial Planning Conference usually attracts more than 500 people and in previous years has run over three days.

The conference has included a large exhibition area with 50 or more exhibitors and the event has been run for over 25 years at various venues around the UK including Manchester and Telford. It attracts a large number of leading Financial Planners from the UK and around the world. Expert and guest speakers have included leading international and celebrity speakers.

Last year the rival Personal Finance Society combined its regional annual conferences into a major Festival of Financial Planning at the NEC near Birmingham in an event which attracted nearly 3,300 attendees. Details of the PFS Financial Planning conference 2018 have yet to be announced.

More in this category: « Annual CISI Financial Planning conference moves to Brum Advisers must remain vigilant on with profits - consultant »
back to top