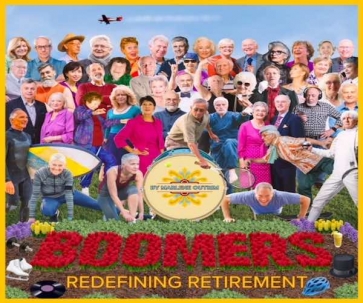 An ex-President of the Institute of Financial Planning has penned a new book showcasing ‘inspiring’ people aged 60 – 90 that demonstrate how to make the most of retirement.

Ms Outrim, whose career in finance spans nearly three decades, said she had helped many people to redefine their retirement and ensure that they could have a ‘life well lived’ and get the most out of their later years.

The publication looks at the changing shape of retirement, with more people choosing to continue an active working life.

Ms Outrim told FP Today: “My book is about a new approach to retirement influenced by the boomer generation. It links wealth, health and happiness, the three ingredients to a long and fulfilling lifestyle in your later ages: a life well lived.

“It was inspired by the many clients I have worked with over the years, who want to continue leading a life with purpose which empowers and satisfies them. Retirement doesn’t necessarily mean the end of a meaningful life, provided they follow the advice in the book.”

The book contains “examples of inspiring 60, 70, 80, even 90 something year-olds who are starting to really live their lives when they should, in theory, be slowing down”.

The front cover, a mock up of the Beatles album cover for Sgt Peppers Lonely Hearts Club band, depicts a mixture of Ms Outrim’s clients and inspirational retirees including Dame Vera Lynn.

Nick Cann, former CEO of the Institute of Financial Planning, said: “This is a very interesting read, positive, full of practical tips and ideas, as well as useful information. It will act as an inspiration for your retirement. For those moving on to this next stage of their life or already in it, this is a book I would strongly recommend.”

The IFP’s founding member and another ex-President, Paul Etheridge, also founder and chairman of the Prestwood Group, commended the book.

He said: “If you want to ensure a happy and healthy retirement and one that will empower you to be active and purposeful, this is the book for you. Marlene spells out the way you can get the most out of this important stage of your life and how you can plan financially to make sure you have enough money to maintain your desired lifestyle.’’

The official book launch will be held at the Off the Wall art gallery, Cardiff, on International Women's Day 8 March.

Ms Outrim, a Chartered Wealth Manager, will be there to sign copies and discuss the book.

Meanwhile, another book of interest to planner has been released by Dr Moira Somers, who described herself as a clinical neuropsychologist, professor and financial recovery expert based in Winnipeg, Canada.

The book is called Advice that Sticks: How to give financial advice that people will follow.

She said: “For many years, financial planners have been telling me that their work is as much about client psychology as it is about finance.

“They asked me to write a book about how they can form stronger working relationships and give more on-target advice, especially for clients who might be reeling from big life changes. Advice that Sticks is my response to their request.”

Dr Somers’ book is out on 28 February, and is available for pre-order on Amazon or through any bookstore or library, or direct from the Practical Inspiration site. (ISBN 978 1 78860 014 9)