Register for Financial Planning Today website for FREE to view more stories and get our daily newsletters. Click on 2 stories to see Registration pop up.
Tuesday, 18 January 2022 08:43 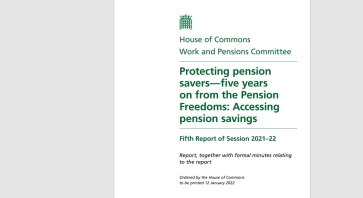 A lack of advice for pension savers risks destroying the flexibilities offered by the Pension Freedoms, according to a new report from MPs on the Work and Pensions Select Committee.

The report highlighted the importance of independent financial advice.

MPs on the committee said the government needed to do more to improve the take-up of the Pension Advice Allowance.

This was because only the independent advice process can recommend the best products and offer responsibility for the outcomes for the client, MPs said.

The committee pointed out that while the current rules allow people to withdraw three lots of £500 in separate years, tax-free, from their pension fund to pay for independent advice, many providers have hampered customers from accessing this money.

It has called for the Pension Advice Allowance to be revisited, saying that it has failed to deliver what policymakers had hoped.

The report from the Work and Pensions Committee is part of the first review of the Pension Freedoms which were introduced in 2015.

The MPs' report also called on the government to push savers more strongly towards Pension Wise.

It says the government should aim to boost Pension Wise usage to 60%. It is currently around 14%.

The report calls on the government to consider two trials. One where Pension Wise appointment are automatically offered to savers looking to take an income from their pension. A second trial which would look at offering appointments to people at the age of 50 before they access their pensions.

The report also looked at whether a more enhanced guidance service should be offered to support pension savers more.

The Work and Pensions Select Committee said it would welcome a more personalised guidance service tailored to the individual’s needs. The report suggests that pension providers may be best placed to offer this kind of service.

Helen Morrissey, senior pensions and retirement analyst at Hargreaves Lansdown, said pension providers have stayed away from offering such services, “for fear of being seen to be straying into advice.”

The report also called for the government to drop plans for a ‘pension statement season’ if the benefits cannot be clearly demonstrated.

The report said the idea of a statement season would add extra paperwork without any obvious consumer benefit.

Currently any pension saver who wants to access their 25% pensions tax-free cash needs to make a decision about the retirement income route they wish to take with the remaining 75%.

The committee wants to explore options for “de-coupling” the decision to allow savers to take their 25% tax-free cash without choosing a retirement income route for the rest of their savings.

He said: “For those people who are focused on taking their tax-free cash, entering drawdown often makes little difference from a practical perspective.

“For people not choosing to draw an income when taking their tax-free cash, their money may very well be invested in exactly the same way as before, with identical charges. This risks introducing another retirement option and increasing complexity for customers for no obvious benefit.”

She said pension savers were “being left fumbling in the dark trying to navigate pensions complexity” and “far more must be done to help pension customers benefit from the Pension Freedoms”.

She said that a stronger nudge towards Pension Wise would not be enough, and welcomed the proposal that customers should be automatically enrolled into Pension Wise appointments.

She said: “The thrust of pension policy has been revolving too much around what is happening to pension pots, rather than the individuals who are relying on this money for their later life security.

“The Committee points out that government needs much better data on how Pension Freedoms are operating, and recommends urgent research be conducted to see how the freedoms are working.  The DWP and Treasury should join together to monitor progress, but currently the data being published only shows how much money has been taken out, or how many pots have been accessed (either fully or partly), but this tells us little about whether the right decisions have been made.

“If people have many pension pots and are just taking money from part of their savings, that is not of concern and is what the freedoms were meant to facilitate. But if people are cashing in their entire retirement savings, paying large amounts of tax and either spending the money straight away or just putting it in the bank or other investment accounts, then they are clearly not making the most of the freedoms. This type of information is vital.”

The full report from the Work and Pensions Committee can be read online on the Committee website.