Register for Financial Planning Today website for FREE to view more stories and get our daily newsletters. Click on 2 stories to see Registration pop up.
Tuesday, 18 January 2022 09:57 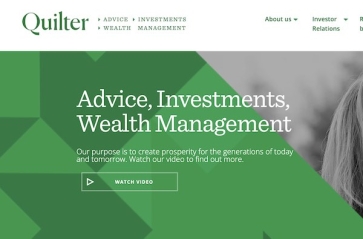 Proposed automatic appointments with Pension Wise at the age of 50 could boost demand for independent financial advice, according to Quilter.

This morning a report from the Work and Pension Committee on the Pension Freedoms proposed that Pension Wise appointments be made automatic.

One of the proposals was for appointments to be made automatically for all pension savers when they reach 50 years old.

He said that if they were offered early enough in the retirement planning process they could push more pension savers towards taking independent financial advice.

He said: “While we would welcome a trial of automatic Pension Wise appointment booking, certain behavioural shifts need to happen before these can be a success. With the rise in DC savings comes greater responsibility on the part of savers, and this is something they’ll need to understand as early as possible.

“Therefore, it’s best the automatic appointment happens as early as possible, ideally at the age of 50. Any later, and it’s likely people will have already made up their mind.

“Likewise, an early Pension Wise appointment will likely push people in the direction of financial advice, which really is the gold standard when it comes to getting the most suitable retirement plan in place. This can only be a good thing.”

Another measure proposed by the Work and Pensions Committee was de-coupling the 25% tax-free cash from the saver making decisions about the retirement income route they wish to take with the remaining 75%.

Mr Greer was more cautious about this proposal and said the government needed to exercise caution if it chooses to go down this path.

He said: “It would add more complexity to an already intricate pension tax system, given it would require ring-fencing of fund rights.

“Instead of adding more rules, the government could explore whether product innovation could achieve the same goal.

“At least when you access your tax-free cash you then have to think about where the remainder of your pot is invested, which drives engagement. We can’t on the one hand try to boost engagement through Pension Wise appointments and on the other reduce engagement by decoupling the tax free cash.”